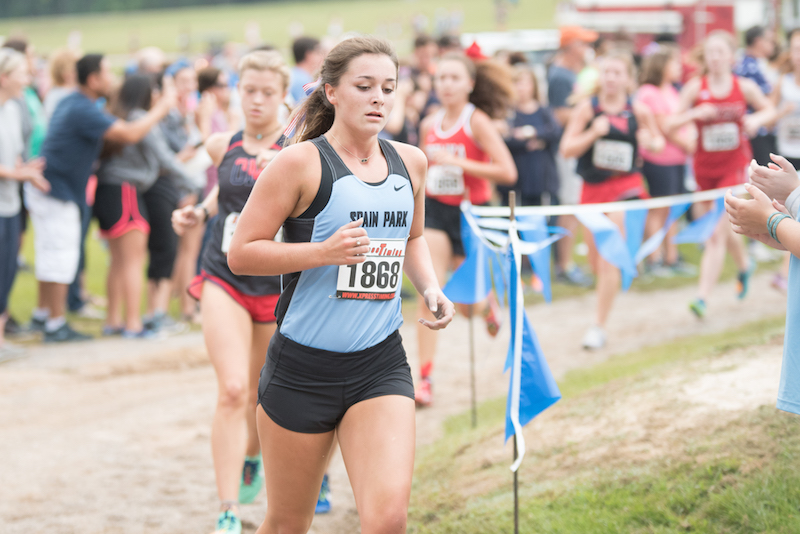 Spain Park finished in third at the Jesse Owens Cross Country Invitational, which tied for highest in the county with Westminster. (File)

OAKVILLE – One of the largest cross country events in the country took part at the Oakville Indian Mounds Park on Saturday, Oct. 7, as 226 schools from Alabama, Tennessee, Georgia, Kentucky and Mississippi took to the course to compete against hundreds of runners.

While there was a gold, silver, bronze, red and green division for both the boys and girls with schools having several runners compete in each flight, there were some individual and team performances that stood out from the pack.

Starting in the gold division for the girls, Thompson’s McKenzie Hogue continued her impressive run. Just like boys’ teammate Brandon DeMarcus Lee, Hogue finished in sixth in the division with a time of 18:32.35.

Oak Mountain was the only team to finish in the team standings of the gold division as the Eagles were able to take 14th with a total of 379 points.

The Jaguars had possibly the best race of anybody at the event on both the boys and girls side of things as two top 10 finishers led to that third place finish in the team standings.

The strong performance for Spain Park was highlighted by eighth grader MacKenzie Culpepper, who finished in fifth with a time of 19:43.50, which according to Alabamarunners.com is a personal record.

Sophomore teammate Holland Lidkay finished just five spots lower in 10th with a time of 20:00.58. Mary Virginia McKinley was the only other top 50 finisher in 46th, but the Jags also had two more top 100 finishers in Paige Walls, 78th, and Kristen Hopkins, 82nd.

Oak Mountain’s highest finisher in the silver division was senior Olivia Hannum, who finished in 29th with a time of 21:05.73.

Chelsea’s Teanna Cason was the only Hornets runner to run in the silver division of the girls race. The sophomore finished strongly in 48th with a time of 21:41.42.

The bronze division was highlighted by Westminster at Oak Mountain, who like Spain Park finished in third in their respective division’s team standings.

The Knights were led by two top 10 finishers as Hallie Porterfield and Sarah Kate Lipperd finished in sixth and seventh respectively.

Briarwood also competed in the bronze division and finished just three spots behind the Knights in sixth with a total of 185 points. The Lions were led by Anna Beth Hild and Adrienne Goolsby, who both finished in the top 30.