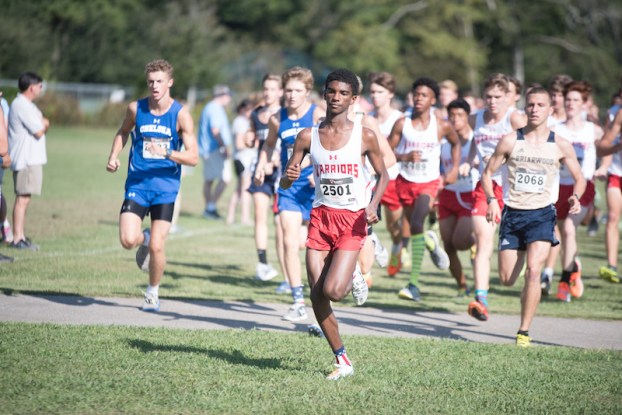 OAKVILLE – One of the largest cross country events in the country took part at the Oakville Indian Mounds Park on Saturday, Oct. 7, as 226 schools from Alabama, Tennessee, Georgia, Kentucky and Mississippi took to the course to compete against hundreds of runners.

While there was a gold, silver, bronze, red and green division for both the boys and girls with schools having several runners compete in each flight, there were some individual and team performances that stood out from the pack.

Thompson junior Brandon DeMarcus Lee continued his strong season by finishing in sixth in the gold division, or the highest classification. Lee, coming off back-to-back first place finishes, took sixth place out of 302 runners with a time of 15:58.01.

Also at Thompson, senior Jacob Wyatt finished as the highest county finisher in the silver division, taking 12th with a time of 16:59.80. As a team, the Warriors finished sixth overall in the division.

Trent Malloy, a freshman at Briarwood, finished fourth in the Bronze division out of 430 runners with time of 16:59.28 to help lead the Lions to an 11th place finish in that division.

Westminster at Oak Mountain senior Nate Collins had the strongest showing of any county runner as he picked up a second place finish in the green division with a time of 16:44.66. His teammate Hunter Wright wasn’t too far behind in fourth with a time of 16:54.15.

Those two guys, as well as two others in the top 20, helped lead the Knights to a second place team finish in the division with a total of 86 points, which was 32 points behind Hebron Christian’s winning score of 54 points.

Other highlights from the gold division featured runners from Spain Park, Oak Mountain and Briarwood.

It starts with Spain Park’s Charlie Trower and Jacob Warner. Trower, a sophomore with the Jags, finished as the second highest county finisher in the gold division by taking 17th with a time of 16:21.43.

Warner, a junior, also had a strong showing finishing in 47th with a time of 16:53.41. It led to the Jags finishing as the highest team in the standings as they were able to grab a finish of 18th with a total of 483 points.

Oak Mountain’s highest finisher was Bryce Keefover, which has come to be expected after a strong start to the 2017 season. Keefover finished in 56th with a time of 16:57.01. The Eagles’ only other top 100 finisher was Hansen McCown in 92nd as Oak Mountain finished 29th in the overall team standings.

In the silver division, the Helena Huskies had a strong race led by none other than senior Blake Vaughn in 17th with a time of 17:10.21.

Spencer Hodges and Brady Barton weren’t too far down the standings, as they finished in 334d and 38th, respectively. Those three helped lead the Huskies to a team finish of ninth, just behind Thompson’s seventh place finish in the division.

By ALEC ETHEREDGE | Sports Editor OAKVILLE – One of the largest cross country events in the country took part... read more