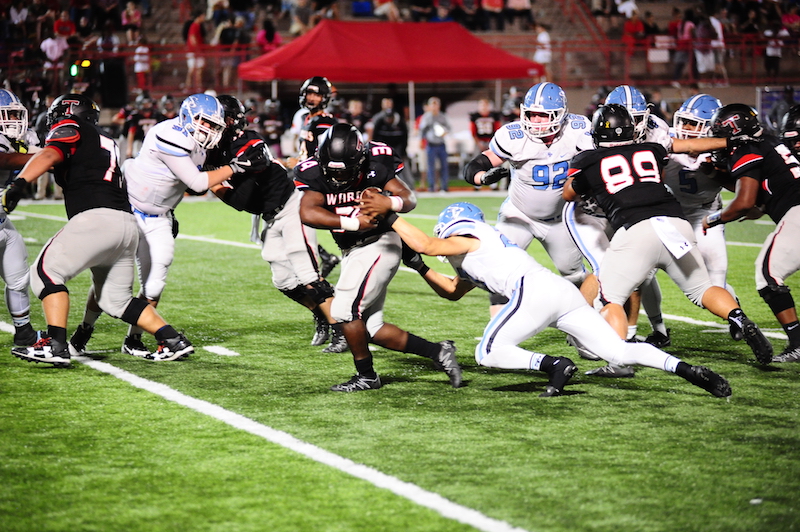 Thompson’s Joseph Ford runs against Spain Park in last year’s game. This year the two will compete in a top 8 matchup as the No. 3 Warriors will travel to take on the No. 8 Jaguars in our Game of the Week. (File)

We’re heading down the final stretch of the 2017 football season as matchups become bigger and bigger each week. Several teams have a chance to clinch a playoff spot this Friday night, with Thompson, Pelham and Briarwood having the best chance.

For the rest, there are two or three region games left to determine their fate over the coming weeks. We have all of our AHSAA teams playing in a busy Week 8, but nothing will top our Game of the Week between Spain Park and Thompson.

Thompson at Spain Park (Game of the Week)

As our No. 2 game to watch in 2017 coming into the season, this matchup was a no-brainer for Game of the Week. Spain Park is 9-2 in the all-time series with the Warriors’ last win coming in 2008, but history means nothing going into this game as Thompson is currently ranked No. 3 in Class 7A and Spain Park No. 8.

While Thompson is coming in on a roll with a 6-0 record, the Jags have had some misfortunes of late. It started with back-to-back losses to Hoover and Mountain Brook in the final minutes, before escaping with a 35-26 win over Huffman this past Friday night coming off a bye week to put the past behind them.

One thing is very similar between these two teams, they have offenses that are unstoppable at the moment. The Jags are averaging 35.5 points per game as Braxton Barker has really hit his stride and running backs D’Arie Johnson and Jalen Henderson continue to impress.

What the Warriors are doing, on the other hand, might be even more impressive. They’re putting up 44.8 points per game and haven’t scored less than 40 points in five straight games.

The difference in this game will be defensively. Thompson has made the best of defenses look silly by putting up historic offensive numbers and will square off against a Spain Park defense that has declined the last three games and is giving up 24 points per game. For that reason, the Warriors win a track meet and clinch a playoff berth for the first time since 2006. Thompson 42 Spain Park 31

Oak Mountain is coming off three straight losses having taken on Thompson and Hoover in back-to-back games losing 49-14 and 59-7, respectively. The problem right now is the loss of the Eagles’ top two running backs in Luke Percer and Ethan Duncan. This week, Oak Mountain will look much more like the team that started 3-0, however, as they take on a 1-6 Tuscaloosa County team that is giving up 38.6 points per game. Oak Mountain 31 Tuscaloosa County 10

Sitting at 1-5, Helena is coming off four straight losses, including a 42-14 loss this past week to Opelika, one of the state’s best 6A teams. This week, it doesn’t get any easier for the Huskies as they take on No. 4 and undefeated Wetumpka, who is scoring 48.7 points per game and has put up 50-plus in three straight. Helena 14 Opelika 48

Chelsea gets the team that just beat Helena 42-14 this week as they’ll host Opelika this Friday night. It’s a game where an improved Chelsea offense will have to be able to put up a lot of points, but putting up the number they would need to win will be too difficult. They’ll get their first one of the year next Friday against Chilton County. Chelsea 21 Opelika 45

Pelham has lost two straight games and given up 51 and 55 points in each, but that’s come against two of the best teams in the state in Thompson and Wetumpka. It doesn’t represent the improved Panthers I’ve seen in 2017. This week they’ll not only beat a 1-6 Chilton County team, but with a Helena loss, the Panthers will also clinch a playoff spot. Pelham 28 Chilton County 10

Briarwood continues to impress, especially on the defensive side of the ball, after a 31-6 win over St. Clair County. The Lions have given up more than seven points just twice this season and on average are giving up just 8.3 points per game. This week the 6-0 Lions get an 0-6 Woodlawn team that shouldn’t find the end zone. Briarwood 42 Woodlawn 0

Calera sits at 3-3, but two of those losses are to good opponents in Mae Jemison and Demopolis by one possession, while the other—a 33-13 loss to Jackson-Olin—they had a chance to win were it not for several turnovers. This week they’ll bounce back coming off a bye week and pick up a big win over Jemison as they look to sew up a playoff spot with a Dallas County and Sumter Central loss. Calera 31 Jemison 14

Shelby County is to the point of having to win out to make the playoffs with Pleasant Grove and Briarwood still on the schedule. Pleasant Grove is coming off back-to-back losses, but if you break things down, they have competed a lot better against the same opponents than the Wildcats. Shelby County 17 Pleasant Grove 28

Vincent has won three straight games for the first time since 2014 behind work-horse Chris Hardie’s ground attack. The Yellow Jackets have won those three games in blowouts and should pick up a fourth blowout-win in a row over a 2-4 Horseshoe Bend team. Vincent 31 Horseshoe Bend 13