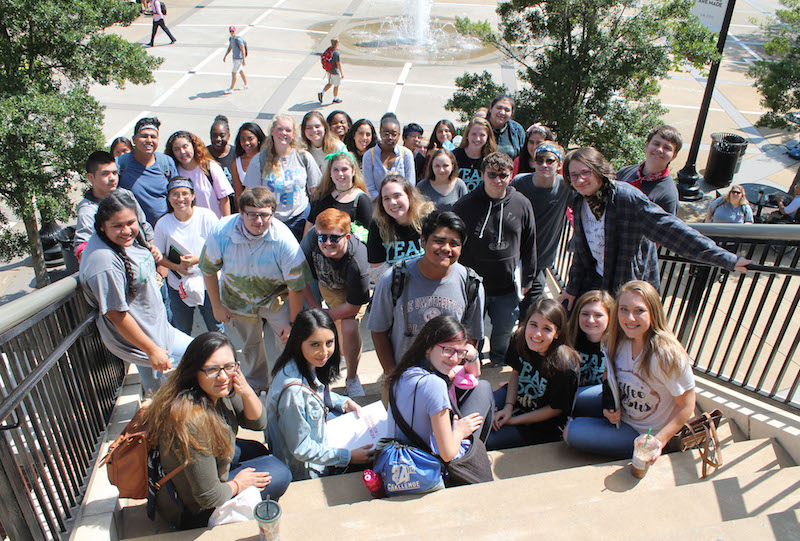 With Pelham High School’s diverse mixture of media veterans and those new to the writing, lit mag, yearbook and broadcast classes, over 50 of our students were excited to attend the Fall Regional Workshop at the University of Alabama, where Alabama Scholastic Press Association (ASPA) has its offices. Spending a day on a university campus working with college professors, grad students and professionals working in the fields of communication, journalism and media is transformative for high school students.

Opening the workshop, Dr. Chris Roberts, of the University of Alabama’s Journalism and Creative Media Department, had students interactively engaged attempting to discern between trustworthy and untrustworthy media outlets. Watching our media students engage in critical thinking started the day powerfully. After the keynote speaker, attending adviser sessions fills teachers’ days, so we hear about students’ session experiences on the bus ride home and beyond.

“Our session leader’s name was Emmett. He was amazing,” copy editor and sophomore Erin Riley reported. “We had so much fun. We talked about you Mrs. Nolen.”

I laughed, hoping that they’d shared the best of me with Emmett Christolear, a UAB grad and former editor of UAB’s Literary Arts Magazine. He has taught magazine production at UAB’s Ada Long Workshop—and he obviously has a way of engaging young creatives that is fascinating.

“He gave us new ideas about Write Night and fundraising,” Lexi Thompson said, “And thanks to Emmett’s team building session, I know other people in Lit Mag better.”

“The teambuilding session made me realize that being on Lit Mag prepares us for being in organizations in the future where it takes a team effort to accomplish goals,” said staffer Catherine Blake.

Tambrianna Smith enjoyed her interviewing session most. Guadalupe Valtierra and Jhenny Calderon are both excited to try new techniques from their photo session and several students were inspired by design classes.

Amidst the jumble of coffee, sandwiches and sessions, PHS media groups encountered ideas, collaborated on new levels and emerged as teams.