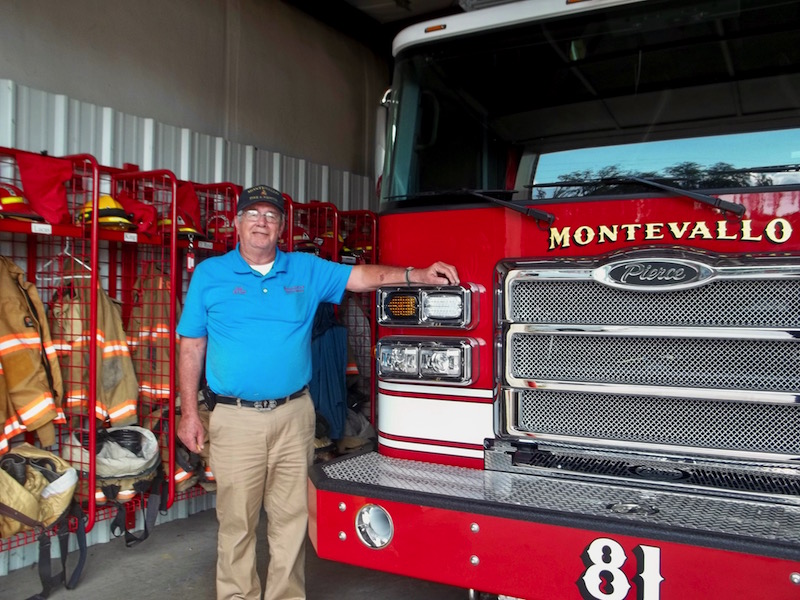 When I am visiting friends or relatives in far-flung places such as Kinsale, Va.; Fort Myers, Fla.; or Philadelphia, folks I meet often ask where I’m from.

I make it my job to be sure they remember Montevallo if it ever comes up in their hearing again. Of course, I start with the University of Montevallo and how it has no football team but still has Homecoming. They usually express surprise to hear that Homecoming here involves competitive musical productions and that alumnae (and alumni) retain their Purple or Gold identities forever.

Another way to make Montevallo stick in their memories is to describe the city’s biggest annual holiday blowout celebration. Yep, Fire Prevention Day. It is Oct. 14 this year, and you will be hearing more about it, of course, as it draws closer.

If you live in Montevallo, you have never managed to sleep through it, even if you are a hard-partying student. Of course, the dog can’t go—sirens make him howl. We leave him at home with the television’s sound on full blast and all the doors and windows closed.

Years and years ago, Montevallo held some sort of unofficial record for the biggest Fire Prevention Day Parade in the Southeast. One stood on the sidewalk along Main Street watching engines and tankers and rescue trucks from towns and cities, not just in Shelby County and Alabama, but from Georgia and Tennessee and who-knows-where-else? The thought ran through one’s mind: “What happens if Pinestraw, Miss., or Marigold, Ga., has a major conflagration right about now?”

The noise from those early parades may have awakened half the occupants of the city cemetery. Candy thrown from the backs of firetrucks surely kept Montevallo’s children awake and bouncing off the walls until at least midnight.

Other highlights of those annual parades? Junior firefighters rappelling off the top of the snorkel truck, and “Little Red,” a 1938 pumper. This was the very first truck the department bought brand new, said Fire Chief Bill Reid.

The parade has not had so many visiting trucks in the last decade—possibly because the liability insurers for Pinestraw, Miss., and Marigold, Ga., started worrying.

And the junior firefighters no longer rappel off the snorkel truck—too much fuss by lawyers and insurers.

“Little Red,” though, will be there, as bright red and shiny as ever.

Oh, and this year’s parade will mark the debut appearance of a real beauty—a brand new shiny red Pierce pumper, built just for the Montevallo Fire Department in Wisconsin.

The excitement starts at 10 a.m. Saturday, Oct. 14, followed by a fun day in Orr Park where children can learn fire safety while talking to real firefighters and exploring the trucks.