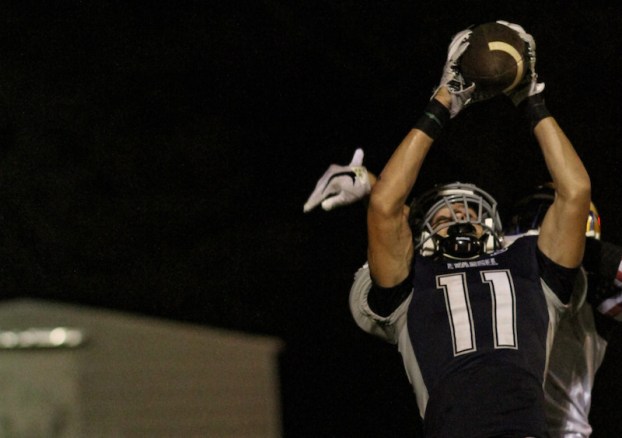 LINDEN – In its final 11-man football game of the season, Evangel Christian knocked off the defending AISA Class A state champion Marengo Academy, 12-0, on Thursday, Oct. 12.

“We played hard. The kids got after it. I knew it would be an old-style game on defense, because that’s what they do,” Smith said of Marengo’s rushing attack. “I told the kids before the game we wanted a zero, and they got it.”

The Lightning and Longhorns were scoreless through the first quarter of play. Marengo threatened to score early in the second quarter, but fumbled on first-and-goal from the 5. On the Longhorns’ next possession, Davis Windsor dropped Marengo quarterback Gavin Thompson in the backfield on fourth-and-1, to give Evangel the ball at the 39. The Lightning later converted on fourth down to move across midfield and later scored on a 46-yard pass play from Tyler Henderson to Luke Sanders with 2:04 to play in the half.

After a bad snap on a Marengo punt gave Evangel good field position and the ball with 17 seconds to play, Henderson found his brother Coleby Henderson from 36 yards out for a touchdown, but the play was waved off due to offensive pass interference. It was the first of three Evangel touchdowns in the game to be taken off the board due to penalty.

Leading 6-0 out of halftime, Evangel looked for a big strike on the first possession of the third quarter, but Hunter Parker intercepted Tyler Henderson’s pass and returned it to the Lightning 5. On the next play, ECS forced another red zone fumble, taking over at their own 3.

Later in the third quarter, Coleby Henderson returned a punt to the 2, but was called back because of a flag. ECS was also penalized on the next play, which took a 35-yard touchdown pass to Seth Harrison off the board.

Late in the third quarter, Evangel found the end zone again, without penalty, as Kamden Smith took it up the middle from 24 yards out to make it 12-0. The Lightning’s 2-point conversion failed.

ECS looked to add some insurance in the fourth quarter, but a touchdown pass to Smith was called back for a chop block.

John Lloyd, Hunter Green and Theo Mangos led the Evangel defense in the shutout, while Smith said his nose guards, Samuel Graham, Luke Moore and Jonah Clore were the anchors up front.

“When you run a 3-3 stack defense, you have to have a nose guard who can play. Those guys just get after it. They control the middle so we can stunt and blitz,” Smith said.

Evangel (6-2, 3-0 ACSC) will host Lyman Ward Military Academy on Friday, Oct. 20 in an 8-man game for Homecoming and Senior Night to close out the regular season. The game will be the Lightning’s first since 2015 at the Evangel Sports Complex, located at 6020 Highway 119.