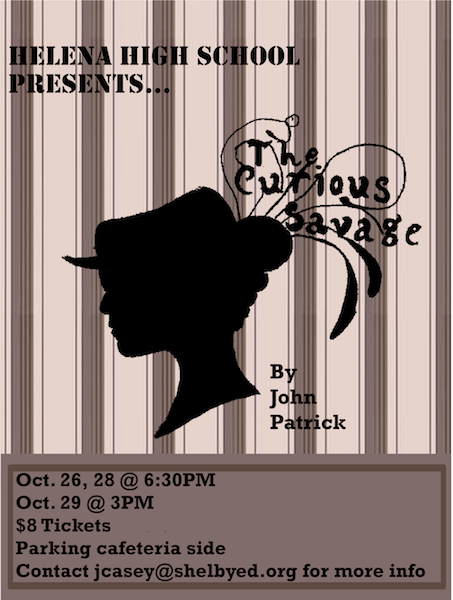 It is a comedic play written by John Patrick about Ethel P. Savage, an elderly woman whose husband recently died and left her approximately ten million dollars.

Contrasting the kindness and loyalty of psychiatric patients with the avarice and vanity of “respectable” public figures, it calls into question conventional definitions of sanity while lampooning celebrity culture.

The Curious Savage first premiered on Broadway on October 24, 1950 and starred Lillian Gish.

On the weekend of, November 4, Helena High will host the District 6 Trumbauer Festival by the Alabama Conference of Theaters.

“There will be around 600 theater students at HHS that weekend performing in various categories to qualify to go to the state level at UNA in December,”  Casey noted.

Trumbauer is a competition with categories such as Studio One Act Play, Solo Comedic Monologue, Solo Male Pantomime, Solo Drama Musical, Duet Pantomime—all categories won by HHS students in the past.

“Lastly,” Casey said, “we will be performing the musical Annie on February 8-11.”

Annie, a Broadway musical that opened in 1977 ran for six years, setting a record. It spawned many productions in numerous countries, as well as national tours and won a Tony for Best Musical.

It was based upon the popular Harold Gray comic strip, Little Orphan Annie.

The songs “Tomorrow” and “It’s the Hard Knock Life“ are among its most popular musical numbers.