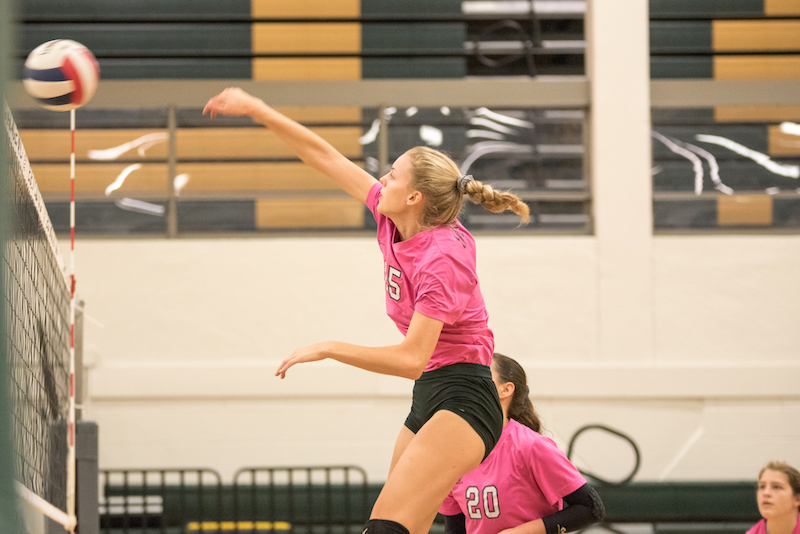 Pelham's Emorie Long spikes a ball during the match with Chelsea. Long led the team with 16 kills in the win. (Reporter photo/Keith McCoy)

PELHAM – Class 6A, Area 8 features three of the best volleyball teams, not just in the 6A classification, but in the state. You would think that would create for a battle to see who would take the area crown, but instead one team stood out from the pack the entire season.

After defeating the Chelsea Hornets on Wednesday, Oct. 11, the Pelham Panthers, who had already won the regular season area championship and the right to host the area tournament, claimed a perfect record in a region that featured three top 10 teams for the majority of the season.

The impressive aspect is that the Panthers finished area play with a 12-2 set advantage over both Helena and Chelsea, dropping just two sets to the Huskies in a thrilling five-setter back on Sept. 19.

While Chelsea has had a very impressive year under head coach Jessica Pickett, they finished area play with a winless 0-4 record without winning a set. The Hornets’ 22-6 overall record, however, shows they aren’t a team that can be taken lightly and can make a run in the area championship and the playoffs if they are clicking.

The match on Oct. 11 saw Pelham jump out early in set one as they built a lead and didn’t let go winning the first set 25-18.

It didn’t get any closer in the second set, as the Panthers not only built their largest lead of the night, but won by a larger margin than the first set edging the Hornets 25-13 to take a 2-0 lead in the match.

With Chelsea forced to win the third set to stay alive in the match, the Hornets put up a fight. They battled all the way to the end and it led to a 24-24 tie before Pelham reeled off two consecutive points to win the set 26-24 and the match 3-0.

Emorie Long had an unbelievable night around the net putting home 16 kills, which easily led the team as Sarah Guthrie’s eight was second on the team. As a team, the Panthers had a total of 33 kills, meaning Long had close to half of them.

Pelham also had nine aces in the match thanks to a balanced attack from the service line as seven players had at least one assist.

Georgia Stonicher had a nice match in her own right accounting for a team-high 16 digs as well as 27 of the team’s 29 assists. Grace Nolen had the other two assists, while finishing second on the team with 10 digs.

Pelham is now 26-7 on the season after beating Calera 3-1 the previous night. They have four matches left and a tournament before hosting the area tournament on Monday, Oct. 23.

Chelsea has a match at Briarwood on Monday, Oct. 16, before they’ll take part in two tri-matches at home on Oct. 17 and 19 to close out the regular season.