HOOVER – A pizza delivery driver in Hoover was arrested for allegedly stealing about $800 from the business. 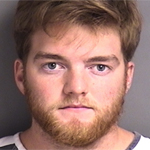 Jeremy Wayne Puckett, 22, of Helena faces two third-degree burglary charges and was being held at the Jefferson County Jail on $5,000 bond as of the morning of Thursday, Oct. 12.

Two burglaries occurred at the Pizza Hut restaurant off Lorna Road—on Oct. 8 when about $335 in cash was stolen and on Oct. 10 when about $448 was stolen, according to information released by the Hoover Police Department.

There were no signs of forced entry, and investigators learned that one of the store managers was missing a key to the business.

Officers believed the burglaries were occurring in the early morning hours and were in the area at about 6:30 a.m. on the morning of Wednesday, Oct. 11, when an alarm call was received from the business.

A vehicle was seen leaving the area around the time the call was being dispatched.

A patrol officer stopped the vehicle and identified the driver, who told the officer he was a Pizza Hut employee and was at the restaurant to check his schedule when the alarm activated, according to police.

Police contacted the store’s management, who confirmed the suspect was an employee but had no reason to be there while the business was closed.

Puckett was detained and brought to the Hoover City Jail for questioning, during which he confessed to committing the burglaries.