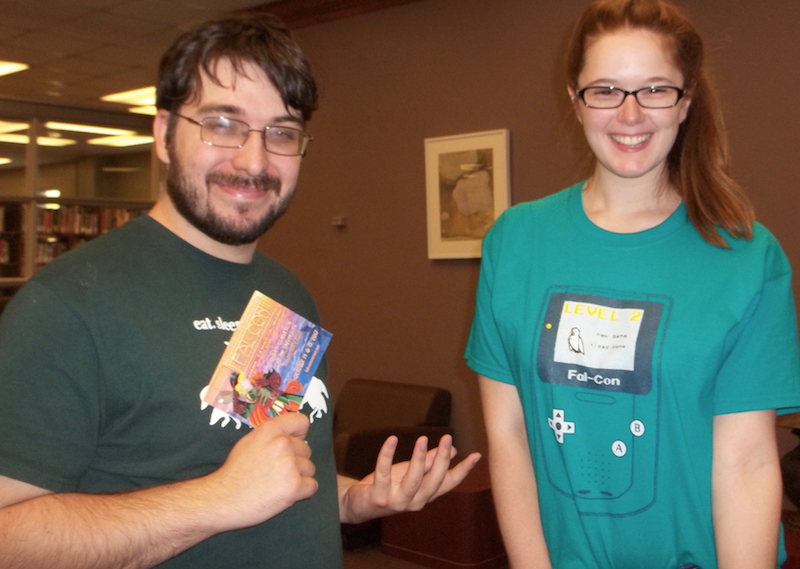 About five years ago some students at the University of Montevallo hit on the idea of having an anime convention, but they totally did not know how to go about putting a convention together, or even a Con (which is what a convention or a conference about “nerd” preoccupations is called).

“We didn’t know what we were doing, basically,” said Trevor Jones, “so we didn’t have a venue.”

Not being experienced at these things, the students had not jumped through the right hoops to use UM facilities. They wound up, however, making a really smart move—they went to City Hall.

Now, follow me on this:  Anime is the term for a special kind of Japanese cartooning that is extremely popular among young people around the globe. Montevallo’s sister city is Echizen Town, Japan.

Since then, Jones has earned his undergraduate degree in social work and added an MBA from UM’s Stephens College of Business. He has a real job now, but his heart belongs to Fal-Con.  “This is a passion project,” he said.

And the CON is now starting its fourth year with between 700 and 1,000 participants expected for the weekend.

Jones still manages the monetary side of the event, but Katy Johnson, an enthusiastic mass comm major, handles the marketing end. Both are paid only with the satisfaction of seeing the crowds increase each year.

Those first two years, the Cons were fairly small and held in Montevallo High School, Jones’s alma mater. Last year, Fal-Con was held in Comer Hall on the UM campus. The crowd grew to almost 500.

This year the event is using Comer, as well as Farmer Hall and the gym in Myrick Hall.

There is a web site (falconvention.net) and a Facebook page (Fal Con).

You’ve got this old girl on exactly what a “Maid Cafe” is, but it appears to involve delicious cakes . . . so what more do you need to know? I’m a little shaky on “bird puns,” too, but the dress-up part (cosplay) definitely looks like something I would understand.

Brent Black—Brentalfloss on YouTube—is a guest artist, as well as Akio Boy, which, according to its website is “a production company based in Birmingham that creates multimedia influenced by video games, anime, comics and storytelling.”

The gaming is not all thumbs, Johnson said.  “There will be board games, too,” she said. And some role-playing and some cosplay competitions.

“This is all about interactive experiences—anime, gaming and pop culture,” said Johnson.

Two weeks after it ends, they said, it is time to start planning Fal-Con 2018.