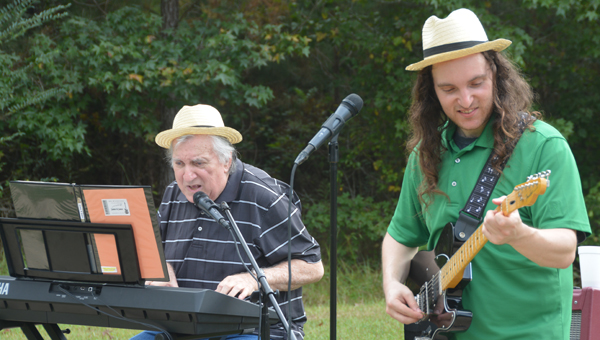 James and James perform during the Westover Music in the Park on Wednesday, Oct. 11. (REPORTER PHOTO/STEPHEN DAWKINS)

WESTOVER – Seniors in Shelby County had the opportunity on Wednesday, Oct. 11, to enjoy fellowship, food and live music.

The eighth annual Music in the Park event was held at Westover Park.

About 50 seniors from four senior centers across the county attended the event, which featured music from James and James, and a meal under the park’s pavilion.

The event was begun by Westover Councilwoman Annette Tyler, who started the town’s senior group in 2005 and then Music in the Park in 2010.

“I thought, how nice it would be if we did something and invited everybody here,” Tyler said.

“She’s a busy lady, and we’re so thankful for you,” Riggins said. “We’re happy to have you out here today.”

Representatives from the Harrison Regional Library and SouthernCare New Beacon Hospice were also in attendance.

The event has featured various entertainers throughout the years, including the Chelsea High School choir one year.

Bo Robertson, director of the Calera Senior Center, said her group has been attending Music in the Park since its inception, and the seniors look forward to the chance to visit with others from around the county.

“They love it,” Robertson said. “One year we came up here and it was so cold they had to put tarps over the whole [pavilion] and use heaters, but they didn’t want to leave. They enjoy coming up here.”