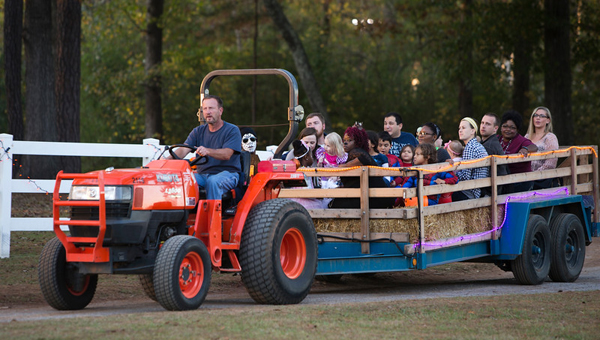 The city of Hoover will host its annual Hayride and Family Night at Veterans Park off Valleydale Road on Oct. 26 from 5 p.m. to 8 p.m. Families can enjoy various activities in a safe environment. (CONTRIBUTED)

HOOVER – The city of Hoover is gearing up for its annual Hayride and Family Night at Veterans Park off Valleydale Road on Oct. 26 from 5 p.m. to 8 p.m.

The city has hosted the event for more than eight years, allowing kids of all ages to dress up in costumes and trick-or-treat with local exhibitors ranging from businesses and churches to various groups throughout Hoover, organized by the Hoover Area Chamber of Commerce.

“This is a great time for families to come out to the park in a safe environment and let their kids dress up in costumes,” said Erin Colbaugh, events coordinator with the city of Hoover. “I think families just enjoy the atmosphere. We will also have hayrides and a balloon twister.”

A new addition to this year’s event is a wide variety of food trucks that will be on site for families interested in purchasing dinner at the park.

Other new additions this year include 6th Day Creatures, who will have several different animals on-site for children to see and interact with, as well as a DJ on stage that will be playing music and games for participants, Colbaugh said.

Colbaugh said the event has become a popular one throughout the years, and attendance varies depending on the weather or other events held on the same night.

Admission is free, and the only cost for families will be foods or beverages purchased from the vendors.

Parking is available at Spain Park High School where shuttles are available to the event.

For more information about the event or any updates, visit the city of Hoover’s Facebook page where “Hayride and Family Night” is listed under the event’s section, call (205) 444-7500 or visit HooverAlabama.gov.