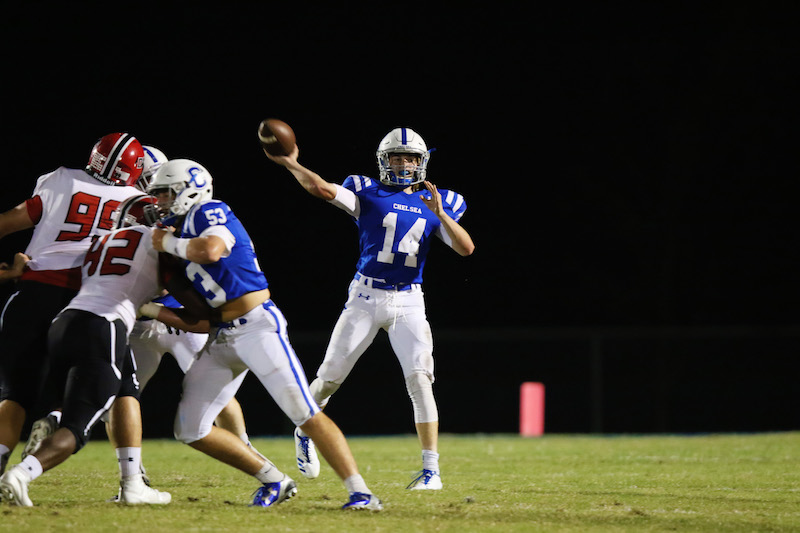 Chelsea remains winless on the season after falling at home to Opelika, who has been one of the best teams in 6A this season. (For the Reporter/Cari Dean)

CHELSEA – It’s been a slow season for the Chelsea Hornets, specifically on the offensive side of the ball, but in a down year, they have been able to battle when a lot of teams would have given up. While the final score of 37-10 against Opelika resulted in a tough loss on Friday, Oct. 13, it still showed an improved Chelsea team.

Opelika came into the matchup as one of the top teams not solely in Region 3, but Class 6A in general with their only losses coming to 7A Auburn, 7A No. 1 Central Phenix City and 6-1 Benjamin Russell.

It set up a tough matchup for the Hornets on Friday night, and the Bulldogs showed why early in the game by jumping out to a 23-0 lead in less than two quarters of action.

The scoring got started when Opelika was able to pick up a fumble and stroll all the way to the end zone for a 72-yard touchdown midway through the first quarter. The turnover by Chelsea had given Opelika a 7-0 lead with 6:20 remaining in the opening quarter.

Less than three minutes later and Opelika had scored again, this time on an 18-yard touchdown run from Malik Wilson, which put them up 14-0 with 3:52 remaining in the first quarter.

That’s how the first quarter ended, but early in the second, with Chelsea threatening to score and cut into the lead, Opelika turned the tables with a 99-yard pick six to extend its lead to 20-0 with 10:37 remaining in the half.

The Bulldogs added a field goal shortly after to extend that lead to 23-0, but finally, after having several drives cut short due to turnovers or stalls, Chelsea was able to put something together before the half as Kendrick Simpson scampered into the end zone to cut the lead to 23-7 at the half.

Despite the effort, the deficit was just too much to overcome for Chelsea as Opelika came out in the second half and kept building momentum. They eventually extended their lead to 37-7 early in the fourth quarter before Chelsea added a touchdown late in the game to make the final score 37-10.

The Hornets remain winless on the season with the loss, but take on Chilton County next week, who is 1-7. That matchup and Helena the week after give Chelsea a chance to put together a two-game winning streak to close out region play and salvage some confidence for their 2017 campaign.