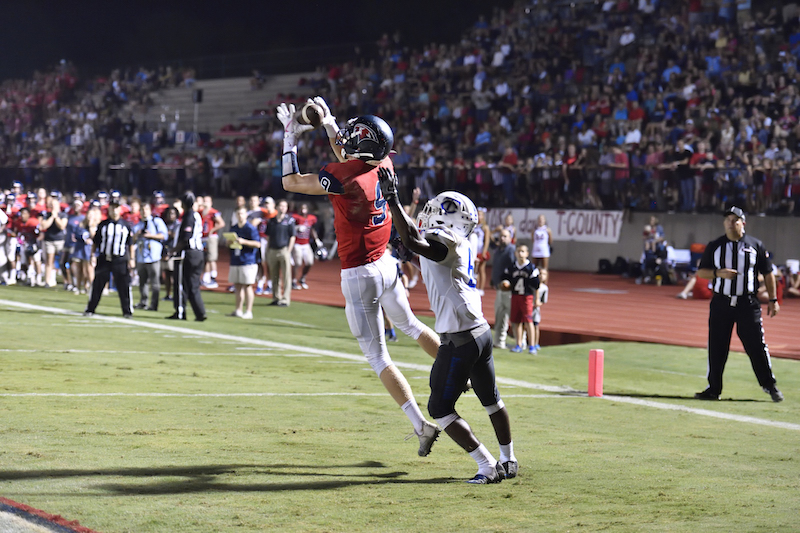 Oak Mountain's Nathan Jones catches a touchdown pass with three seconds left in the first half, which brought the Eagles to within one score at the half. (For the Reporter/Barry Clemmons)

NORTH SHELBY – A gassed defense was the difference maker in Oak Mountain’s loss to Tuscaloosa County on Friday, Oct. 13 at Heardmont Park, as the Wildcats were able to walk into the road environment and pick up a 33-28 upset win over the Eagles.

Despite the exhausted defense, Oak Mountain had its chances late in the game after three consecutive fourth down stops against the Wildcats in the fourth quarter.

The last of those stops came with 1:43 after the Eagles took over on downs at their own 24-yard line. Two passes from Connor Webb to Cole Thomas for a combined 20 yards had moved the ball to midfield.

Two plays later, after Webb scrambled for a big gain across midfield, he found tight end Carson Bobo for a 15-yard pass to set the Eagles up inside the Tuscaloosa County 30-yard line.

After a sack, one dropped pass off Bobo’s fingertips and another pass called incomplete due to the receiver narrowly being out of bounds, Oak Mountain faced a 4th and 11 with 16 seconds remaining.

Webb scrambled out of the pocket, planted his feet, and fired a ball to the far sideline, but it was low and out of reach of the receiver ending the game and giving the Wildcats the upset, while the Oak Mountain players were left heartbroken.

The Eagles’ struggles started early in the game, however, not on the last few drives. That being said, they never gave up and battled the entire night.

After Oak Mountain went three-and-out on its opening drive, the Wildcats went on a long drive that was capped off by a 35-yard touchdown pass from Brylan Jackson to Tre Williams to give Tuscaloosa County a 7-0 lead.

Oak Mountain responded with a big answer, however, as they went nine plays in just less than four minutes capped off by a 1-yard touchdown run from Jonathan Bennett to tie the game at 7-7.

The Eagles were able to pick up a stop on the Wildcats’ next drive, but on Oak Mountain’s ensuing possession, they fumbled the ball on their own 23-yard line.

Four plays later, Frederick Evans scampered into the end zone for his first touchdown of the night to give Tuscaloosa County a 14-7 lead.

A couple of quiet drives came and went before Oak Mountain tied things up on its fifth drive of the game when Webb found Bobo for a 30-yard touchdown pass.

The Wildcats came right back with a response, however, when Evans scored for the second time, this time an 84-yard touchdown fun to give Tuscaloosa County a 21-14 lead.

After the Eagles went three-and-out again, Tuscaloosa County went on what looked to be the last drive of the half, which lasted five minutes and ended with a Jackson touchdown to put the Wildcats up 27-14 after the missed PAT.

Oak Mountain was able to drive down the field in 52 seconds, however, to tie the game, when Webb found Nathan Jones in the end zone for a 23-yard touchdown pass to cut the lead to 27-21 at the half.

On the Eagles first drive of the second half, they used that momentum boost to their advantage when Luke Percer, a leader of the team who was returning from an injury, stumbled 44 yards up the middle of the field for a touchdown to give Oak Mountain a 28-27 lead.

Bobo led all receivers with 70 yards on four receptions, while Thomas added 47 yards on five receptions and Jones added the lone receiving touchdown.

Justin Evans led the defense with 11 total tackles. While Jordan Davis and Brett Cruce combined for 3.5 tackles for loss.