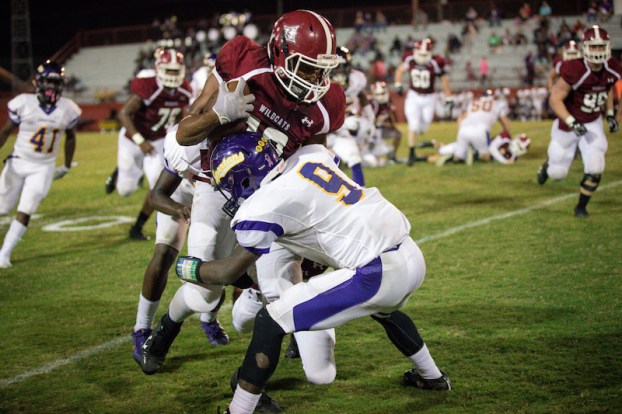 COLUMBIANA – The Shelby County Wildcats were on the trend of winning a game, then losing a game through the first six games of the season, but on Friday night, Oct. 13, the Wildcats, who according to the trend were set to win, ended up falling 49-6 to Pleasant Grove in their second to last home game of the season.

It marked the third time this season Shelby County has lost by 49 points or more having lost 56-21 and 52-8 already this season. Coming into the year, the defense was something head coach Heath Childers knew needed to be fixed, but through seven games of the season, the Wildcats are giving up 33 points per game and it’s led them to a 3-4 overall record and a 1-4 record in region play.

Pleasant Grove used two quarters of 21 points to run away with this one, but it started immediately in the first as the Wildcats found themselves down 21-0 at the end of the first quarter.

Being in that big of a hole isn’t something this Shelby County team is meant to claw out of as they like to control the game on the ground. That continued to be the case in this one as they ran for 239 yards and threw for just 11 yards.

In the second quarter, the Wildcats were able to pick up a score, but only got six points in the quarter, while Pleasant Grove scored again as well, but added the point to give them seven in the quarter and a 28-6 halftime lead.

Coming out of the locker room, Pleasant Grove got back to its powerful offensive play by having its second 21-point quarter of the night to jump up by the final score of 49-6 as Shelby County failed to score the remainder of the night.

Jeremiah Crenshaw and Lamont Bush, as has been the case all season, were the offensive highlights for Shelby County. Crenshaw had 74 yards on 10 carries, while Lamont Bush led the ground attack with 96 yards and one touchdown on 13 carries.

By Anthony Richards | For the Reporter JEMISON – Turnovers were the name of the game for the second straight... read more