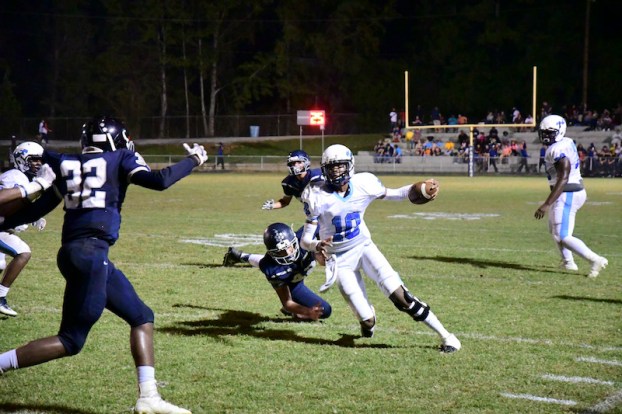 Calera’s Cornelius Brown makes a cut along the sideline against Jemison on Oct. 13. He was the main offensive weapon for the Eagles. (For the Reporter/Anthony Richards)

By Anthony Richards | For the Reporter

JEMISON – Turnovers were the name of the game for the second straight week for Jemison, as they lost 47-14 on senior night to Calera Oct. 13.

“It was the same thing as last week,” Jemison head coach Van Clements said. “When we hold onto the football, we’re as good a football team as any, but we’re not built to come from behind after shooting ourselves in the foot.”

While the Panthers were reeling from turnovers, Calera wasn’t just celebrating the blowout win, but clinching a spot in the playoffs thanks to losses by Dallas County and Sumter Central.

The strong game was in large part due to Cornelius Brown’s night that included four passing touchdowns and 181 yards through the air on 13-of-17 passing, while also adding 34 yards on the ground on three carries. Orlando Harris and Trenton Yowe both recovering fumbles defensively were key as well.

Despite the result, Jemison could not have drawn up a better start to the game.

Starting quarterback Daniel Martin quickly put the Panthers on the scoreboard with a lengthy touchdown run on the game’s first possession.

Martin kept the ball on a read play on fourth and 1, and picked up the team’s first conversion and points all in one run.

Calera was quick to answer and was moving the ball down the field, when senior Drue Moore read the eyes of the quarterback and broke on the ball for an interception.

Moore returned the interception around midfield and Jemison was driving inside the red zone with a 7-0 lead at the end of the first quarter.

However, the Panthers faced a fourth down to start the second quarter but were unable to move the chains.

Both teams had its share of turnovers and did not play the cleanest of football games. Nine combined turnovers were lost in the game, five by Jemison and four by Calera.

The difference was that Calera was able to translate Jemison turnovers into points, while the Panthers struggled to do so. The Panthers were outscored 28-7 in points off turnovers.

Calera erased Jemison’s early lead in the second quarter and led 21-7 at halftime.

The Eagles’ first four scores all came through the air, followed by two rushing touchdowns and capped off by a kickoff return for six.

Jemison’s defense continued to fight late into the game and forced another fumble that the offense capitalized on with a drive that ended with Martin punching in his second rushing touchdown of the night from a yard out.

“We have a moto of ‘48 minutes long,’ that means from the time we come on the field to the time we leave, we are playing physical football for 48 minutes [length of a game],” Jemison senior Sawyer Smith said.

Nine seniors make up the 2017 football team and they were all recognized along with senior band members, cheerleaders and volleyball players prior to kickoff.

“They [football seniors] show up everyday and they work their butts off,” Clements said. “We’re as good as they are, and they do a good job of leading in the weight room and the classroom.”

For Calera, other than Brown, Dee Woodson had a nice game offensively with 54 receiving yards and one touchdown. Dee Mickens added a touchdown and 45 yards receiving, while QuinDarius Crews had two touchdowns and 40 yards himself.

Rushing wise, Tyler Agnew led the way with 52 yards and a touchdown on just two carries.

By DONALD CAMPBEL | For the Reporter NEW SITE – With the 2017 high school football season reaching the home... read more