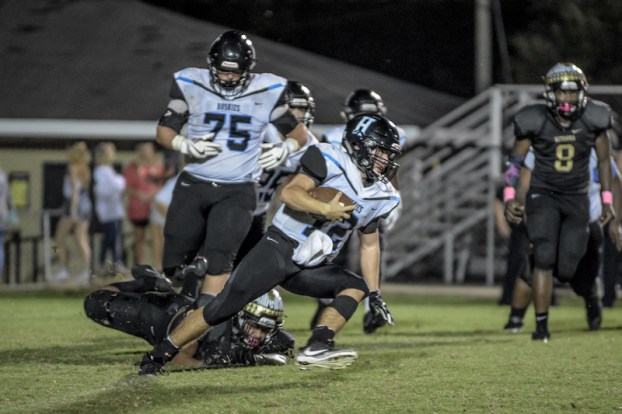 Helena put up a fight against No. 4 Wetumpka, but ended up running out of steam in the end. (For the Reporter/Brian Tannehill)

Helena fights but runs out of steam at No. 4 Wetumpka

By David Granger | For the Reporter

WETUMPKA – The Wetumpka Indians moved within two games of their first undefeated regular season in more than two decades with a 35-14 win over the Helena Huskies in Class 6A Region 3 play here at Hohenberg Field Friday night.

The Indians scored on their second offensive play of the first half and the opening kickoff of the second and junior quarterback JD Martin finished the night with 270 yard in total offense — 170 yards rushing and 107 passing — to key the victory over a scrappy Huskies unit.

But even scoring on their second play from scrimmage on Martin’s 50-yard run around left end, the Indians, who have scored more than 50 points in their last three wins, had a bit of a sluggish start, leading only 14-7 at intermission, something their head coach Tim Perry took the responsibility for.

I didn’t do a good job this week getting them prepared,” Perry said. “We weren’t emotionally ready to play and that’s on me, that’s my job. I think we probably underestimated them and we shouldn’t do that. They’re always well coached. I’ve got to get them ready every week and I didn’t do a good job of that this week. Coach (Watt) Parker and the Helena team had a great game plan against us. They executed real well.

“But, in saying that, I’m very happy to be 8-0, undefeated at home during the regular season. I’m very proud of our young men for stepping up and rallying when we needed to. Hopefully, we got out of this without any injuries and, again, I’m just proud of our guys, the school and the community.”

In addition to Martin’s performance, which included two touchdown runs and a TD pass to Robert Laprade. Kavosiey Smoke rushed 11 times for 105 yards and a touchdown. Keedrick Adams returned the second-half kickoff 81 yards for another Wetumpka score.

Adams’ return seemed to have lit a fire under the Indians, who put together impressive 80-yard drives on their next two possessions. The first took eight plays and largely featured the running and passing of Martin and Smoke, capped by Martin’s 9-yard scamper at left end for the score. Robert Stewart’s PAT stretched the Wetumpka lead to 28-7.

After Helena drove 75 yards on 12 plays for its only second-half score — a 5-yard Lawson Peoples pass to Randall Tolbert, who also caught Helena’s first-half touchdown pass, a 20-yarder from Peoples — Wetumpka drove 80 yards for its final score in 10 plays, the big play being the first of the drive when Smoke ran at center for 34 yards to the Helena 46. Smoke plunged over from the 1 with just 4:06 left in the contest to end the scoring.

Parker, whose team fell to 1-6 and 1-3 in region play, came away impressed.

“They’re as good as they are for a reason,” Parker said. “We knew they were a great program. We knew we had to come down here and battle hard. I was really proud of our guys for just playing hard. That’s what you gotta do. Hats off to Coach Perry and Wetumpka. They’re doing a great job and a lot of kids are playing hard for them. Good high school football game. I hate we came out on the wrong end of it, but our guys played hard and that’s all you can ask them to do.”

The Indians have games at Opelika and Benjamin Russell standing between them and their first undefeated regular season since 1995. That Wetumpka team, coached by John Maddaloni, ran its record to 13-0 before losing to eventual state runner-up Blount in the semifinals of the state playoffs.