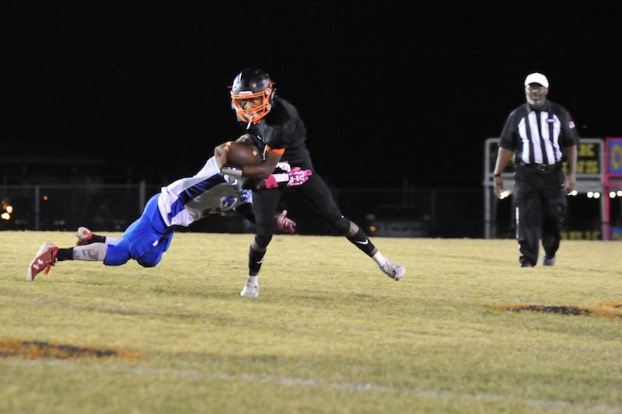 OAKMAN – Montevallo put together a second-half rally Friday, Oct. 13, but it was not enough to overcome a 39-point deficit, falling on the road at Oakman, 52-36.

“I was real proud of our kids for staying resilient and continuing to fight. That’s what we ask them to do. We fought until the final seconds of the game and gave ourselves a chance there in the fourth quarter. We could have had a good comeback, if we could have covered a few onside kicks,” Montevallo coach Brandon Wilcox said.

Oakman threw for a touchdown, returned a punt and ran one in to take a 20-0 lead in the first quarter. The Wildcats added two more touchdowns on the ground in the second quarter to lead 33-0 at halftime.

The lead grew to 39-0 before Montevallo stopped the bleeding with a 70-yard touchdown pass from Davion Gilbert to JJ Evans early in the third quarter. The Bulldogs’ Deon Gilliland recovered an onside kick to give Montevallo the ball at the 46, but MHS was unable to score on the possession.

Oakman added its fourth rushing touchdown of the game with roughly four minutes to play in the quarter, extending its lead to 45-7.

Montevallo managed to nearly cut the margin in half, 45-21, scoring twice before the end of the third quarter on a run by Gilbert and a 72-yard touchdown pass from Gilbert to Tavarius Holman.

With seven minutes to play, Montevallo scored again on a Gilbert pass to Holman and Tyler Olds added a 2-point conversion, 45-29. The Bulldogs were unable to recover the onside kick and Oakman added another touchdown pass to insure its lead, 52-29.

Gilbert ran in another touchdown in the final minute, followed by a Jonathan Grisham extra point to close the scoring, 52-36.

Gilbert finished the night with 383 yards of total offense. He was 19-of-46 passing for 335 yards and three touchdowns, but also threw five interceptions. He added 48 yards rushing on 15 carries.

Holman and Evans each had seven pass receptions for 198 and 83 yards, respectively.

“We’re learning to play the game with energy, and we’re learning to play the game with toughness. I’m excited about these young guys, and as long as they continue to be coachable, I’m excited about the future,” Wilcox said. “Our focus now is for our seniors, leave your legacy for your teammates. For our other guys, it’s continue to build a foundation of making this one of the top programs in the state … As long as we continue to work and improve, we feel we can get some positives out of this season.”

By ALEC ETHEREDGE | Sports Editor CHELSEA – It’s been a slow season for the Chelsea Hornets, specifically on the... read more