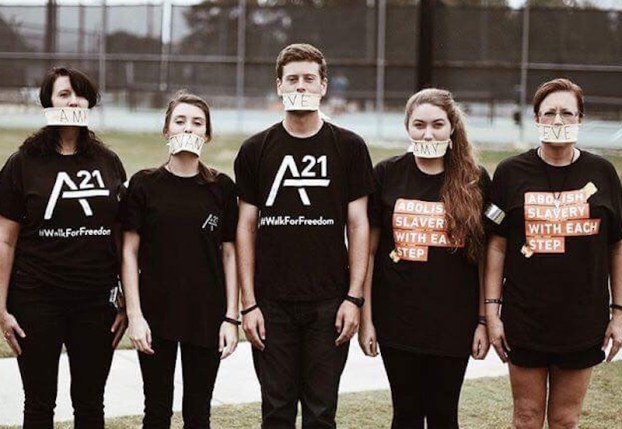 About 25 people marched down U.S. 31 in Pelham to raise awareness for human trafficking on Saturday, Oct. 14. (Contributed)

PELHAM – During the Walk for Freedom in Pelham, about 25 people donned black clothing, tied yellow bandanas across their mouths and walked alongside U.S. 31 on the morning of Saturday, Oct. 14. The name of a person who is currently the victim of human trafficking was written across each bandana.

Maggie Parsons from Birmingham-based Freedom Trade International said the purpose of Walk for Freedom is to combat human trafficking by bringing attention to an issue that affects millions of people globally.

According to Parsons, Walk for Freedom was co-hosted by Freedom Trade International and A21.

The Walk for Freedom in Pelham was just one of hundreds of similar events throughout the world, Parsons said.

“This is a global thing,” she said. “We’re one of hundreds, from Melbourne, Australia to Stockholm, Sweden to Pelham, Alabama.”

According to Parsons, this is the first year a Walk for Freedom event has been held within Pelham city limits. In previous years, Parsons said Shelby County residents had the option of attending the Walk for Freedom held in Birmingham, but they decided to host another event in Pelham to spread awareness to more local community members.

“We wanted to bring it to Shelby County because it’s where we all live,” Parsons said. “And where else better than Highway 31 to spread our message?”

Currently, Parsons said 45 million people from all over the world are being forced into involuntary servitude.

“For us, it’s about bringing awareness to a national issue and a global issue,” Parsons said. “We wanted to spread awareness because it’s needed.”

While the first event started out small, Parsons said Freedom Trade International and A21 will most likely hold Pelham’s second Walk for Freedom next year.

“We already making plans,” Parsons said. “It will probably be this same week next year.”