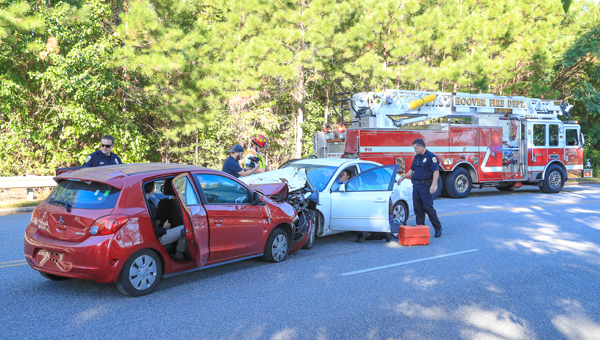 A mock wreck was part of filming a video demonstrating the dangers of drunk driving. (FOR THE REPORTER/DAWN HARRISON)

About 40 people—school administrators, students who participated in producing the video and members of the community who supported the effort—attended the premiere showing in the school’s theater.

In the video, a wreck is caused by drunk driving, and the students involved and their families must deal with the consequences.

The premise is based on the “Every 15 Minutes Program,” which is so titled because a person dies from an alcohol-related collision every 15 minutes.

SPHS senior Kathryn King brought the idea to school officials, and she and her parents, Henry and Melinda King, were two of the actors in the video.

“Pretty early on, when they were casting, Kathryn told me that she would be the one who died and asked me to be in the video,” Melinda King said. “I had watched several of those videos, and I said, ‘If that’s what you want us to do, we’ll do it.’”

The emotions evident in the video were real, King said.

“They told me to just respond to the situation,” she said. “I thought I knew exactly what it was going to be. It was so realistic that by the time I had to go up…there was no acting. Seeing your child laid out with a body bag over her, and then they pull the bag back so you can see her face…

“Tears flowed, and you just thought, ‘How could anybody go through this?’”

Though King participated in filming the video, there was a part she did not know about until the premiere showing, in which the students who “died” say what they did not get to tell people.

‘I know it’s impactful for parents; I hope it is for students also,” King said.

In addition to the premiere showing, the video was also shown to all Spain Park students, about 1,650 of them, during various study hall periods.

“We’ve gotten several good emails and follow-ups from our students,” Britnell said. “Teachers have said it opened up opportunities for good conversations later in the day.”

“We’ve been fortunate to have everybody involved,” SPHS Assistant Principal Josh Britnell said. “Everybody just wanted to pitch in.”

The video was uploaded to YouTube (search for “Every 15 Minutes – Spain Park HS”), and links posted to the school’s Facebook page (@SpainParkHS), in hopes it would reach a broader audience.

“We hope it will have an impact not only on our school but our community as well,” Britnell said.