ALABASTER – A Birmingham woman is facing up to 20 years in prison after she allegedly stole tens of thousands of dollars worth of equipment from an Alabaster plumbing business. 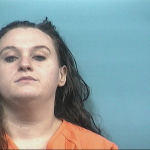 The Alabaster Police Department arrested Lonie Danielle Teston, who lists an address on 18th Ave. N.W. in Birmingham, on Oct. 14 and charged her with one felony count of first-degree theft of property.

The crime is a Class B felony, and carries up to two decades in prison upon conviction, according to Alabama law.

The arrest came after Teston allegedly stole “assorted tools and materials” from the Alabaster-based Alabama Plumbing Contractors company on Sept. 23. The stolen items were worth about $22,000, according to Teston’s arrest warrant.

As of Oct. 16, Teston was being held in the Shelby County Jail on a $30,000 bond. She did not yet have a future court date listed in Shelby County District Court.

Teston’s Shelby County charges came a few days after she was arrested by the Trussville Police Department on several drug-related charges, including possession of marijuana, methamphetamine and alprazolam.