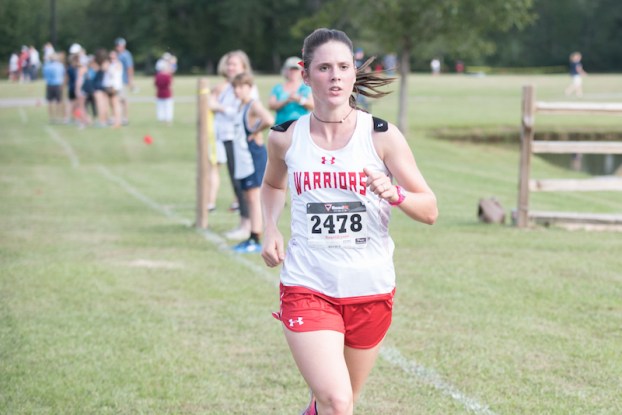 Thompson’s McKenzie Hogue picked up her second win of the year and fifth top 3 finish in six events at the DEW it on the Trails event held in Decatur. (File)

DECATUR – Thompson’s McKenzie Hogue continued her dominating cross country season by picking up her second win of the year at the DEW it on the Trails event held at Point Mallard in Decatur on Saturday, Oct. 14.

One of the more impressive aspects of Hogue’s first-place finish is that it marked her fifth time in six events to finish inside the top 3. She has now finished inside the top 2 four times in six races and has yet to finish outside of the top 6 at any of her six races this season.

As a team, the Warriors finished in eighth as they only had one other top-50 finisher in Emily Allen. Allen, a freshman, finished in 46th with a time of 21:51.30.

The highest team finish came from the Pelham Panthers in fourth place, who grabbed a total of 143 points, which was just nine points behind Lawrence County in third.

It started for the Panthers, as it does every race, with junior Katie Strozier. Strozier finished just inside the top 20 in 18th with a time of 20:27. 70. Strozier has yet to finish outside the top 26 this season and now has three top-20 finishes.

There were some strong performances behind Strozier as well. Juniors Alex Wilkins and Meredith Bass finished in 27th and 29th, respectively, to give Pelham three top-30 runners.

Just behind Pelham in fifth place with a total of 176 points was Spain Park as the Jaguars picked up their second top-5 finish in as many events.

Kristen Hopkins, Elizabeth DeVane and Paige Walls all finished inside the top 60 with a consistent effort. Hopkins, a junior, finished in 51st with a time of 22:16.20.

Chelsea finished 12th in the overall team standings, but it was a highlight day for sophomore Teanna Cason, who finished in 30th with a time of 21:12.40. According to Alabamarunners.com, that time marks the best of her young career. She now has three finishes inside the top 30 and one inside the top 10.

HOOVER – The latest chapter in a historic season for Thompson’s football team was a 40-17 win at Spain Park... read more