OMHS grad sworn in as Midshipman in U.S. Naval Reserve 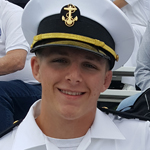 Randle, a graduate of Oak Mountain High School’s Class of 2017 and a resident of Birmingham, will major in marine transportation.

The United States Merchant Marine Academy is one of five federal service academies, which include the Military Academy at West Point, New York; the Naval Academy at Annapolis, Maryland; the Air Force Academy in Colorado Springs, Colorado; and the U.S. Coast Guard Academy in New London, Connecticut.

In addition to the rigorous academic and physical requirements for admission, applicants must be nominated by their congressman or senator. Randle was nominated by Congressman Gary Palmer of Alabama’s Seventh Congressional District, Sen. Richard Shelby and Sen. Jeff Sessions.

As part of his four-year education, Randle will spend one year training aboard active ocean going vessels. The USMMA is the only federal academy where students train on commercial vessels traveling around the globe.

All USMMA graduates earn both a bachelor of science degree and a Merchant Marine Officer license, and incur an obligation to serve the country as an active or reserve officer in the U.S. armed forces.