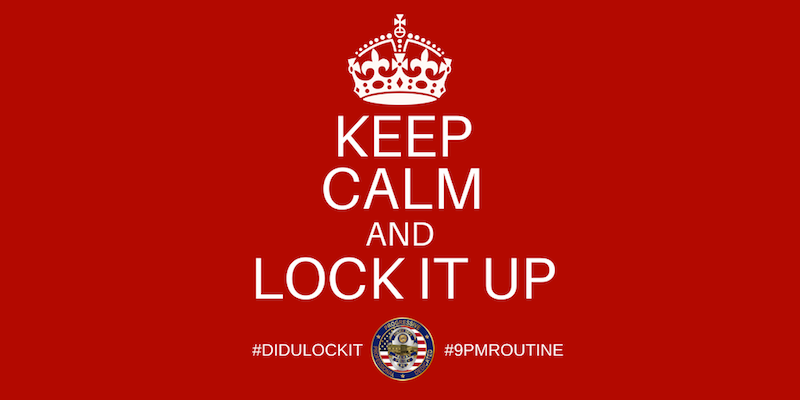 The PPD and other local agencies are spreading awareness about burglaries and thefts through the social media campaign, #DidULockIt? (Contributed/Pelham Police Department)

PELHAM – The Pelham Police Department recently launched the #DidULockIt? campaign on social media to remind Pelham residents about important safety practices like locking cars and homes at night. According to PPD Community Relations Coordinator Ainsley Allison, “Did U Lock It?” puts a local twist on a similar national campaign known as “9 p.m. routine.”

For the campaign, Allison said the PPD and other nearby agencies are attracting the attention of locals by sharing witty statuses, images and gifs on Twitter, using the hashtag “DidULockIt?”

“It’s a question everyone should ask themselves before you go to bed,” Allison said. “A lot of times, these thefts and burglaries are a crime of opportunity.”

Allison said the campaign also served to remind citizens to keep valuable items out of plain sight in vehicles. Even if the cars are locked, Allison said thieves often break windows to steal what’s inside of the vehicle.

“If they see anything out, they know they’re going to get something,” Allison said.

Since the campaign started, Allison said several agencies from the central Alabama area have come onboard with the campaign.

“Even the Tuscaloosa County Sheriff’s Office is participating,” Allison said.

Allison said she’s noticed plenty of feedback from local Twitter users, and is glad that the campaign is engaging the community.

“People are starting to respond like, ‘Hey, I’m locked up over here,’” Allison said. “Especially here in Pelham we want to be proactive and one step ahead if we can be.”