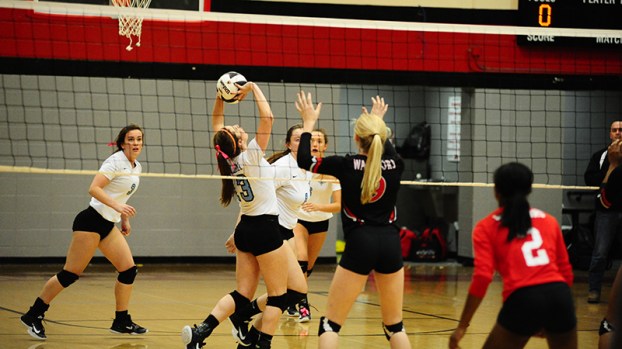 ALABASTER–As time draws closer to area tournament play and the regular season winds down, volleyball teams across the county are looking to play their best matches of the season and on Tuesday, Oct. 17, 6A Helena got the best of the 7A Thompson Warriors on the road.

The Huskies fought back in both the first and third sets to come away with an impressive win on the road.

Helena head coach Amanda Lewis said her team has gone through some highs and lows but the ability to fight back and stay composed was key in the win at Thompson.

“We have been battling with consistency and highs and lows,” Lewis said. “We’re still trying to workout lineups really and who works well next to who. As far as that last match, it’s all about composure, and we were just making sure that we stayed composed because the first game it was the same deficit. We were down by six in the first game and then we were down by six during that timeout and that was the emphasis of our timeout. Just ball control, first ball contact and staying composed and regaining the momentum of the game.”

Emma Johnson helped lead the way for the Huskies with four blocks, six kills and 19 digs.

Hallie Smith had eight kills, Macy Lowery had seven kills and Megan Fortson had six kills for Helena in the win.

With the area tournament approaching the week of Oct. 23, Helena was happy to gain some momentum.

Lee continues dominance along with Jags

By ALEC ETHEREDGE | Sports Editor DECATUR – Thompson’s Brandon DeMarcus Lee continues to be one of the hottest cross... read more