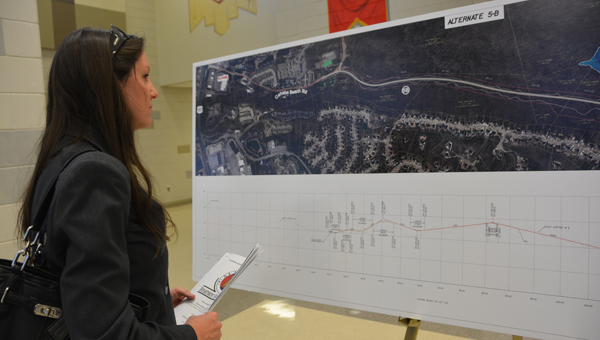 Melissa Chanslor studies one of the proposed alternate routes for an extension of Cahaba Beach Road at a public involvement meeting on Tuesday, Oct. 17, at Liberty Park Middle School in Vestavia Hills. (REPORTER PHOTO/STEPHEN DAWKINS)

VESTAVIA HILLS – Residents studied the four proposals still under consideration for the extension of Cahaba Beach Road in North Shelby County and had submitted their opinions at a public involvement meeting on Tuesday, Oct. 17, at Liberty Park Middle School.

The project would connect U.S. 280 in Shelby County to Sicard Hollow Road near the Liberty Park development.

Supporters say the project would alleviate traffic on U.S. 280 and provide another route to the busy corridor for Liberty Park residents, but others maintain the road would harm the environment around Little Cahaba River, a primary tributary of the Cahaba River, which supplies drinking water for Birmingham.

Alabama Department of Transportation East Central Region Engineer DeJarvis Leonard said decisions about the project would be based on comments from the public.

“The purpose of this meeting is to get individuals to give us feedback on what they would like to see,” Leonard said. “The comments will drive the process.”

Cahaba Beach Road, which on its southern end is an extension of Valleydale Road across U.S. 280, is paved to Swan Drive but then becomes a dirt road.

The road ends at Little Cahaba River at a bridge that has been closed since the 1990s.

The northern part of Cahaba Beach Road begins at Sicard Hollow Road and runs south to the river.

Shelby County has partnered with Alabama Department of Transportation for engineering and environmental studies related to the project.

Four alternates for the route were presented at the meeting.

The southernmost routes (Alternates 5 and 5-B) would connect with Sicard Hollow Road near The Cotswolds.

Carla Chambers, a resident of Liberty Park whose husband owns office space off Cahaba Beach Road, said the project would prevent the couple from traveling all the way to Interstate 459 and then down U.S. 280.

“I think we need something that addresses everyone’s concerns,” Chambers said. “There has to be a way.”

But a group of people who attended the public involvement meeting to campaign against the project said there is only one acceptable outcome: “no build.”

“We don’t want to see another bridge built over the river,” said Marjorie Jones, who lives off Sicard Hollow Road.

Jones was one of a number of people who wore stickers that stated “No Build: Save B’ham’s Drinking Water.”

The group has environmental concerns about the project and thinks it would make traffic worse.

“These are legitimate concerns,” Jones said.

“We have a mandate not to affect the water system,” Leonard said.

Meeting attendees were given an information packet with a project overview, map of the route alternatives and a comment form.

The comment form asked for the person’s interest in the project, opinion of the project, alternate preference and comments or suggestions.

Attendees could also study larger maps that were mounted around the school’s cafeteria and ask questions of officials involved with the project.

After the public comments are gathered and analyzed, a proposal will be formed, Leonard said, which could be the “no build” option.