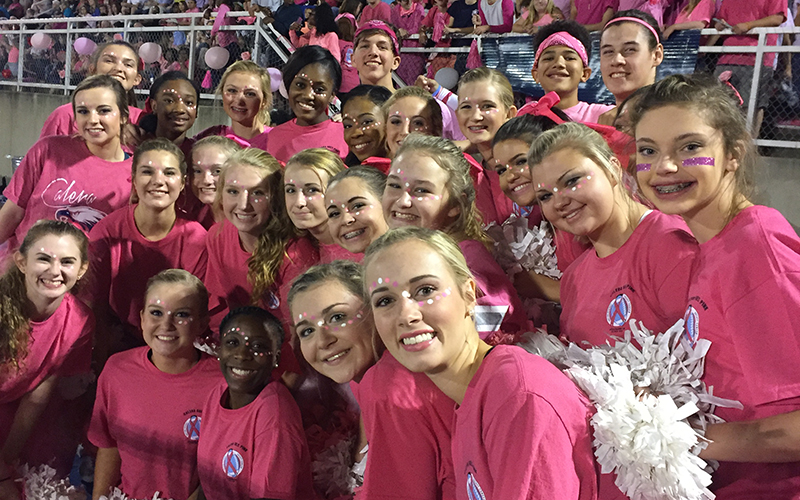 Members of Calera High School “pink out” in 2016 for the city’s annual Calera Goes Pink event. The event spans the month of October and helps raise awareness for breast cancer research. (Contributed)

CALERA – The city of Calera has once again gone “pink” in partnership with the Breast Cancer Research Foundation of Alabama to help raise money for life-saving breast cancer research.

This is the seventh year for the city to collaborate with local public schools to offer T-shirt sales, host survivor recognitions, and invite local businesses to “Paint the Town Pink,” by decorating their storefronts for Breast Cancer Awareness Month, according to a press release from the BCRFA.

According to Sabrina Balch, marketing and communications manager for BCRFA, one thing that makes the city of Calera unique in participating is the entire city is engaged.

“All of the schools from K-12, the fire and police departments, city officials, local businesses, as well as the residents of Calera, are helping raise money and awareness for breast cancer research and the BCRFA,” Balch said. “Chelsea High School and Helena High School also ‘pink out’ their annual football game against each other, which is coming up on Oct. 27. All of the funds donated to BCRFA fund breast cancer research here in Alabama with UAB and their collaborative partners.”

Special activities at the high school on Oct. 27 include a chance to dunk Calera High School teachers in a dunking booth, and an opportunity to try pink hair for a day thanks to local art students.

“This city has really come together to create a grassroots effort to fund breast cancer research and save lives,” Kate Kiefer, board of directors member for the BCRFA said in a release. “Calera is truly showcasing the meaning behind this year’s theme, ‘What You Do Matters,’ by rallying together as a community to help raise funds and awareness for such an important cause.”

Students will also hear about the various types of treatment that their efforts fund, including immunotherapy, drug discovery, and the Dolly Ashton O’Neal Triple Negative Breast Cancer Personalized Medicine Program, according to the release.

Balch said golfer from across the area will also have the opportunity to participate in a Calera Goes Pink Golf Tournament on Oct. 22 at Timberline Golf Club, with all of the proceeds supporting BCRFA.

“In the last seven years, the city of Calera has raised $150,000 in community support for BCRFA,” Mayor Jon Graham said in the release. “The incredible unity of the city, our schools, local businesses, and Calera residents allow us to increase our efforts for fundraising each year.”

Balch said prior to October, the city of Calera and Calera schools sold Calera Goes Pink T-shirts for residents to wear throughout the month.

“While it is too late to get a shirt for this year, those interested can always make donations to research,” Balch said. “If individuals put Calera Goes Pink in the comments section, we will be sure to credit to the Calera initiative.”

All research dollars raised in Alabama will stay in Alabama, but the research and new treatments discovered will reach breast cancer patients across the nation.