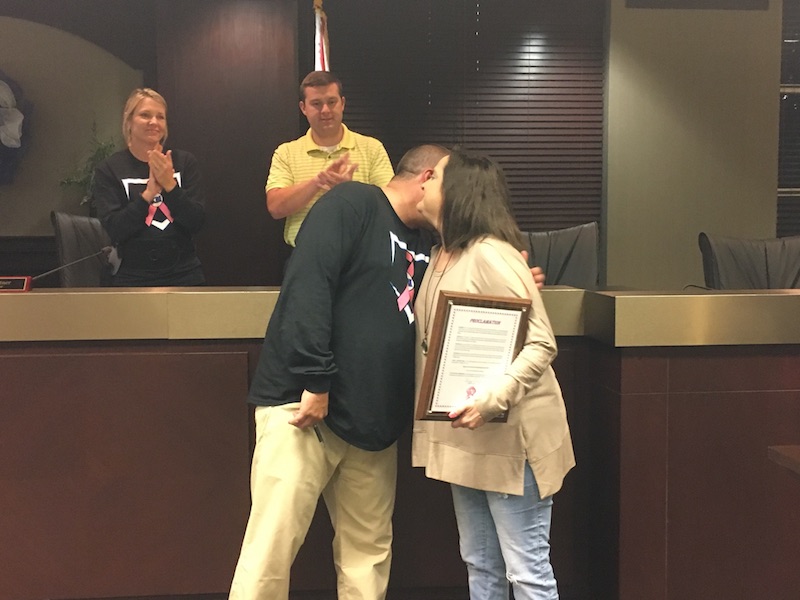 CHELSEA – The city of Chelsea voted to honor a local who is battling breast cancer at a regularly scheduled meeting on Tuesday, Oct. 17.

Members of the Chelsea Baseball Club filled the room to watch as the mayor passed a proclamation for Breast Cancer Awareness Month to honor Kristi Ingram, the wife of city council member David Ingram, who is currently battling stage IV breast cancer.

Kristi and David Ingram said she was grateful for the encouragement she and her family has received from the community, especially from members of the Chelsea Baseball Club.

“Y’all don’t know what a blessing it has been,” Kristi Ingram said. “They’re going to grow into even better young men and women than they already are.”

“It gives Kristi the encouragement to move on and be strong,” David Ingram said. “I appreciate every one of you.”

She also thanked the city for passing the resolution.

“Our family is so thankful and blessed for them to recognize breast cancer and our family,” Kristi Ingram said.

In other council news, the city passed a resolution to accept a bid from Central Alabama Asphalt and Construction Co. for drainage and pavement improvements to the sports complex on Shelby County 47.

Chelsea Mayor Tony Picklesimer said the city has wanted to improve the sports complex for several years and plans for work to begin the following week.