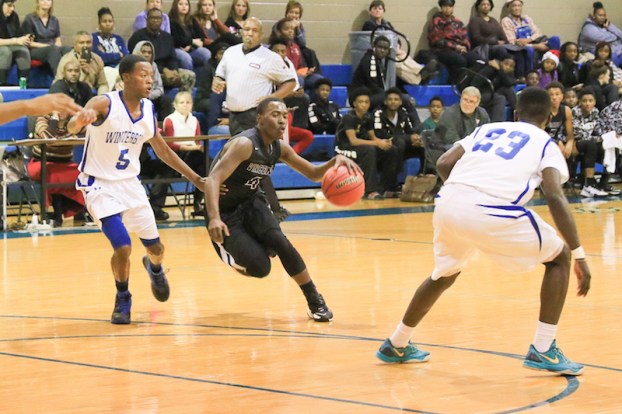 Zavien Kelley will take over as Vincent's point guard in 2017 and will look to replace Stephen Campbell's strong numbers from last year. (File)

Not many teams would consider a trip to the sub-regionals a down year, but that’s exactly what it was for the Vincent Yellow Jackets and John Hadder during the 2016-17 basketball season.

Despite losing their leading scorer in Stephen Campbell, a lot of athleticism and youth occupies the 2017-18 roster and has Hadder excited about not just this season, but the years to come as well.

While the season ended with a 54-32 sub-regional loss to LaFayette, there was still plenty of positive to take away from the season as Hadder led his team to its eighth consecutive sub-regional in his eighth year at the helm and another 20-plus win season with 21 victories.

Heading into his ninth season, Hadder brings with him an average of more than 20 wins per year, two final four appearances, eight straight sub-regional appearances and five regional final games.

Campbell was a large part of last year’s success, averaging 21 points, 6.2 rebounds and 1.7 assists per game las year as the leader, which will be tough to replace.

This year the Yellow Jackets will have five seniors, one junior and four sophomores on the team and will spread the ball around more than relying on a lone scorer.

While they have those five seniors, two sophomores and a junior will be a large part of the starting lineup. Zavien Kelley, however, will be the glue that holds the team together as a senior and three-year starter.

At 5-foot-9, 160 pounds, Kelley played at the two-guard last year, but will move over to run the point this season. He led the team in both steals and assists last year totaling 68 steals, 2.2 per game, and 66 assists, 2.1 per game.

“He’s been our best defensive player for several years now,” Hadder said. “I’m excited about him. I don’t think he played as well last year as he wanted to offensively, but there’s something about when a guy goes from being one of the guys to the guy. This summer, he looked so confident and realized this was his team now.”

He’ll be joined by junior Chris Hardie at the five-spot in the paint. Hardie is having an incredible season on the gridiron and if it’s any sort of precursor for the basketball season, he’ll be entertaining to watch.

Hardie, who stands at 6-foot-1, 240 pounds, was the second leading scorer on last year’s team with 8.9 per game, while leading the team with 7.3 rebounds per game. This year, he should be up closer to averaging a double-double for the season.

Hadder’s face lights up when he talks about the two sophomores who will be joining Hardie and Kelley in the starting lineup.

Malik Hamilton, a 6-foot-3, 165-pound shooting guard, and Jackson McGinnus a 6-foot-5, 200-pound stretch four, will both be thrown into the fire this season due to their athleticism and upside.

“Both of those two will be starting on the varsity for the first time this year,” Hadder said. “They have some learning and growing to do, but so much ability.”

The last of the starters will be senior Stanley Cooper and while he is smaller at 5-foot-11, 170 pounds, Hadder said Cooper is probably the team’s best overall shooter.

“He’s developed into the kind of kid that really understands what we’re trying to do,” Hadder said.

Coming off the bench will be a couple more sophomores in Caleb Wilson and J.T. Youngblood.

Wilson will be the bench point guard and has the nickname of “Turbo,” according to Hadder, because he is the energy of the group and always gets after it.

Youngblood will be a down low guy who is really the muscle and enforcer of the group. Hadder said both of those guys’ personalities rub off on the team and help them play stronger and more energized.

They’ll also have a trustworthy senior coming off the bench in Tyler Hayes, who at 6-foot-5, 165 pounds, is one of the tallest and biggest kids on the team.

“We can play 7, 8, 9 guys if needed this season,” Hadder said. “That’s a luxury we didn’t have last year. Basically our season is going to come down to how quickly they can grow into what we need them to be.”

The Yellow Jackets will open the season on Nov. 16 at home against B.B. Comer with tipoff scheduled for 7:30 p.m.