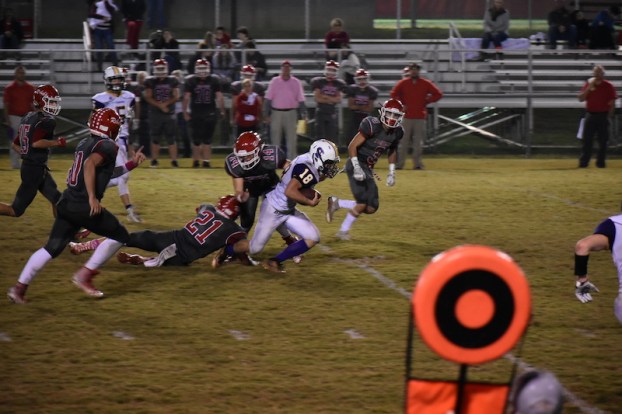 Cornerstone shut out Coosa Valley 23-0 behind five interceptions on defense as the Chargers clinched the three seed in the playoffs. (For the Reporter/Celia Thacker)

HARPERSVILLE – It’s been a process for Cornerstone in year one for head coach James Lee, but the players have continued progressing all season and on Friday, Oct. 20, the Chargers were able to pick up a 23-0 win against in-county, region foe Coosa Valley on the road.

“I can’t say enough about our guys about coming out on top,” Lee said. “Coach (Dane) Reece got Coosa Valley ready to play tonight. He got his guys to play really hard. In a rivalry game you expect that, but both teams did a great job glorifying God on both sides and it was a heck of a battle.”

The scoring started when Patrick Howell, who did it all in the game, took in a touchdown from about 20 yards out to give Cornerstone an early lead. Howell ended the night with 87 yards rushing and that one touchdown.

The rest of the game, Cornerstone took advantage of their lead and played it to their advantage. While lots of penalties set them back, it led to them playing the field position and ball control game.

“We played ball control and field position tonight,” Lee said. “We were able to control things the way we wanted when it came to that aspect.”

It was a tough, hard-fought game between the two throughout the next three quarters as Cornerstone held just a 16-0 lead in the fourth quarter, leaving Coosa Valley within two scores.

With the Rebels driving with just under 8:00 to play looking to trim the lead, Ben Perryman jumped in front of a Coosa Valley pass attempt in the flats and made an incredible one-handed interception.

“He’s got amazing hands,” Lee said of Perryman’s jaw-dropping play. “He’s just the total package of a guy that can play both ways. It was amazing to see that play; it was going over his head in the flats and he just read the pass and leaped up to make a great coach. All my years of coaching football, never seen one like that. He’s got the best hands around.”

That interception was one of five on the night for the Chargers as every time Coosa Valley tried to get some momentum, Cornerstone turned it into a turover.

“Joel Penfield, my defensive coordinator, did a great job mixing up coverage for us on defense tonight and called a great game,” Lee said.

Cornerstone went on to add a score on that ensuing drive after the interception to win by the final of 23-0.

Jake Blankenship led the team with 91 yards rushing and also added 21 receiving yards and a touchdown. He and Howell combined for 178 yards on the ground.

Coosa Valley has a matchup at home against North River Christian on Friday, Oct. 27, but will be in the playoffs the week after as the three seed out of their region.

“I think it’s the start of a process we’re starting to build here and the belief system,” Lee said. “Yes, we’ll be a three seed traveling in that first round, but they are playing gritty and grinding out games. They’re truly starting to see what we want to be about. The seniors have laid a foundation now that will set the future. The sky is the limit.”

No. 8 Benjamin Russell pulls away from Helena for 38-20 win

By GRAHAM BROOKS / Staff Writer HELENA–The Helena Huskies gave No. 8 Benjamin Russell all it could handle for the... read more