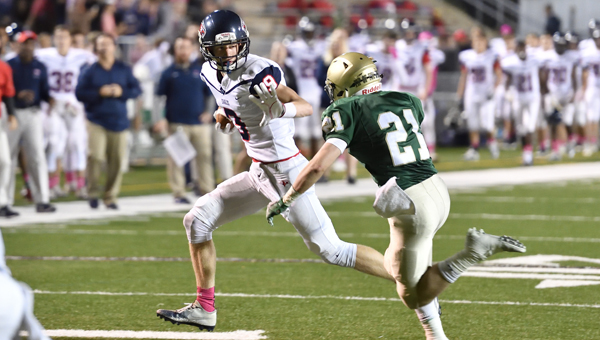 Oak Mountain’s Nathan Jones tries to elude a Mountain Brook defender during the game on Friday, Oct. Oct. 20. (FOR THE REPORTER/BARRY CLEMMONS)

Late fumble costs Eagles with playoff berth on the line

MOUNTAIN BROOK – A fumble lost at the opponents’ goal line and a last gasp pass batted down doomed Oak Mountain’s football team in a 31-28 loss at Mountain Brook that ends the Eagles’ playoff hopes.

In a back-and-forth game, Oak Mountain was in position to take the lead with about 4 minutes left to play, but a run up the middle on first-and-goal from Mountain Brook’s 2-yard line resulted in a lost fumble.

The Eagles’ defense was able to force the hosts to punt, and Oak Mountain took back possession 1:01 remaining in the game.

Passes from senior quarterback Connor Webb to Trey Allen and Luke Percer advanced the ball into Mountain Brook territory, but a couple of tackles short of the first down marker killed much of the time that was left.

On fourth down inside Mountain Brook’s 30-yard line with zeros on the clock, Collin Bussman broke up Webb’s heave toward the end zone.

The Eagles (3-5, 1-5) fell behind 21-0 early in the second quarter as they did not have an answer for Mountain Brook’s option running game, and were not helped by an interception thrown to Coleton Yeager.

OMHS scored its first points on a 28-yard run by Percer on third-and-1 that was set up by a 16-yard screen pass to Percer on a third-and-11.

Christian Hood added the point-after to make the score 21-7 with 6:05 remaining in the second quarter.

The score would be the start of a run that would give Oak Mountain the lead.

A fake field goal pass was unsuccessful on their next possession, but the Eagles scored again before halftime on a 33-yard pass from Webb to Carson Bobo with less than a minute left until halftime.

Oak Mountain tied the game on the first possession of the second half, with a 1-yard run by Webb, and took a 28-21 lead with less than a minute to go in the third quarter on a 34-yard pass from Webb to Bobo.

Mountain Brook answered with a 28-yard field goal by Aidan Hood and retook the lead on a 53-yard run by A.J. Gates during which he appeared hemmed in by the Oak Mountain defense but somehow escaped and raced toward the end zone.

OMHS drove 80 yards on the ensuing drive but fumbled at the goal line.

Oak Mountain outgained Mountain Brook 463 yards to 271 yards and had 25 first downs to their hosts’ 13.

Webb completed 14 passes in 22 attempts for 186 yards, two touchdowns and one interception.

Percer rushed 19 times for 100 yards, while Jonathan Bennett had 95 yards on 18 carries.

HARPERSVILLE – It’s been a process for Cornerstone in year one for head coach James Lee, but the players have... read more