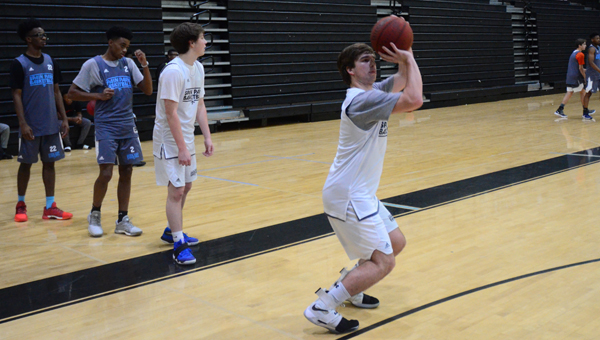 New group of Jags will rely on outside shooting

HOOVER – Fans attending their first Spain Park boys basketball game this season might wonder if they have wandered into the wrong gym.

After the loss of seven seniors, including star Jamal Johnson to the University of Memphis, the Jaguars will rely on a new cast of characters this season.

The Jags will rely on outside shooting and hustle to overcome a lack of size.

“We always run, try to play fast,” Quinn said. “We’re going to try to spread the floor more than anything else.”

Johnson, at 6-foot-3, is the tallest player on the team, though there are several close to his height.

Another starting post player will be Blake Nord, a sophomore.

Boswell and Pickard are two players who are developing into leaders.

This year’s team contrasts sharply with last year’s, which featured a large senior class of players that had competed together for years.

“It’s definitely a challenge, but it’s something we can overcome,” Boswell said. “Everybody is buying in and communicating with each other.”

Pickard has made an effort to apply lessons he learned at the U.S. Naval Academy Summer Seminar over the summer in Annapolis, Maryland.

“That was an eye-opening experience for me,” Pickard said. “The attitude has changed a lot this year. We’ve focused a lot on getting together and playing as a team.”

This year’s schedule will include less regional tournaments as Quinn, in his fourth season as coach, and the Jaguars find their way with a new group of players.

“They’re a lot of fun to coach,” Quinn said. “They all want to be good. They know we’ve got our backs against the wall.”

The first game is Nov. 7 against Cornerstone. Tournaments will include the Sneaky Pete’s Rebel Classic at Vestavia Hills High School Nov. 20-22 and the Metro Tournament at Homewood High School Dec. 28-30.

By ALEC ETHEREDGE | Sports Editor PELHAM – It felt more like a primetime matchup rather than a matinee contest... read more