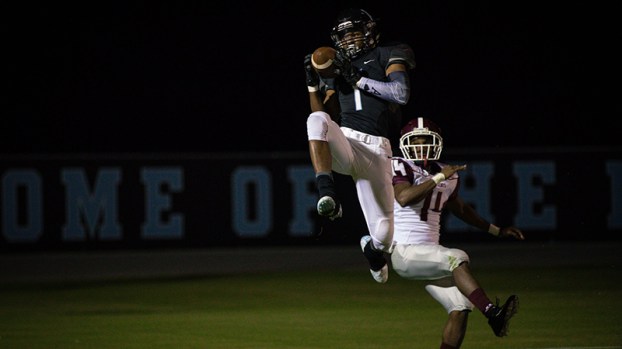 Helena wide receiver Justin Stuckey hauls in a touchdown catch in the first quarter in a region game against Benjamin Russell on Friday, Oct. 20. (For the Reporter/Adam Lee)

No. 8 Benjamin Russell pulls away from Helena for 38-20 win

HELENA–The Helena Huskies gave No. 8 Benjamin Russell all it could handle for the better part of 30 minutes in a region matchup at Husky Stadium on Friday, Oct. 20, but in the end the Wildcats pulled away for a 38-20 win to remain unbeaten in region play.

Despite coming into the game at just 1-6 overall and 1-3 in region play, Helena has been playing much better than their record indicates. On paper, Benjamin Russell was the better team but the Huskies would not go down without a fight.

On Benjamin Russell’s first possession, it was apparent the Wildcats wanted to establish the line of scrimmage by using a stable of running backs.

The Wildcats drove the ball 50-yards on 10 plays as running back Hezekiah Hunter plunged in from 1-yard out to make it 7-0 Benjamin Russell halfway through the first quarter.

On Helena’s second offensive possession of the game, senior starting quarterback Lawson Peoples went down with an apparent knee injury with 4:45 to go in the first quarter on a sack that made it fourth-down and long.

This forced sophomore quarterback Luke Stamba to enter the game with the Huskies trailing by seven early.

Stamba was immediately thrown into a tough spot, as the Huskies would start a drive on its own 4-yard line after a nice Benjamin Russell punt.

Stamba would complete the drive with a beautiful back shoulder throw to Stuckey for a 26-yard touchdown to tie the game 7-7.

Helena head coach Watt Parker talked about Stamba and how he stepped up following Peoples injury.

“Well, you know, Lawson is a great competitor and him getting hurt is tough but you know Luke is a guy who accepts a challenge and he’s a great young man,” Parker said. “He’s a competitor like none other and his greatest quality is that he doesn’t get shaken. He just came in and did his job and he’s a coachable kid.”

On the Wildcats next offensive possession, the Helena defense made a big play as Nic Cummins intercepted a pass off a tipped ball and returned it to the Benjamin Russell 2-yard line.

The Huskies would take advantage of the turnover as three plays later Tolbert ran it in from 1-yard out on a sweep to the right side on the first play of the second quarter to make it 14-7 Helena.

Benjamin Russell would tack on a 37-yard field goal with 6:35 left until halftime making it 14-10 as the Huskies still held a 4-point advantage.

After a stalled drive by Helena, the Wildcats would get the ball back with good field position near midfield with five minutes until halftime.

Benjamin Russell quarterback Landon Cotney broke free for a 20-yard run followed by several good runs by running back Da’vede Herron that included a fourth down conversion to keep the Wildcats drive alive. Eventually, Hunter would score again from one yard out for the second time to put the Wildcats up 17-14 going into halftime.

Benjamin Russell returned the kickoff to the 48-yard line to open the second half and proceeded to drive the ball to Helena’s 11-yard line but were forced into another field goal try.

The 28-yard kick sailed wide and Helena regained possession with 7:10 to go in the third quarter still trailing 17-14.

Stamba would find Stuckey for a 39-yard gain down to the Benjamin Russell 24-yard line but a holding call a few plays later forced the Huskies into a fourth-and-8 where they couldn’t convert and turned the ball over on downs.

Benjamin Russell regained possession and the biggest play of the night came late in the third quarter, as Cotney broke free for a 68-yard touchdown run to put the Wildcats up 24-14.

Down two scores, Helena could never dig itself out of the hole as the Wildcats depth eventually wore down the Huskies.

The Wildcats ripped off several big runs late in the fourth quarter when eventually running back Keedon Young broke free for a 19-yard score to make it 31-14 with 3:21 to go.

Trailing by 17, Stamba made a couple more big throws to Stuckey before connecting with Rhett Henderson for a 61-yard touchdown pass to make it 31-20 after the extra point was blocked.

With 1:09 to go, Helena attempted an onside kick but it was recovered and ran back for a touchdown by Isaiah Holloway to make it 38-20 to seal the game for Benjamin Russell.

With the loss, Helena fell to 1-7 on the season, as the Huskies will take on Chelsea on Friday, Oct. 27, on senior night.