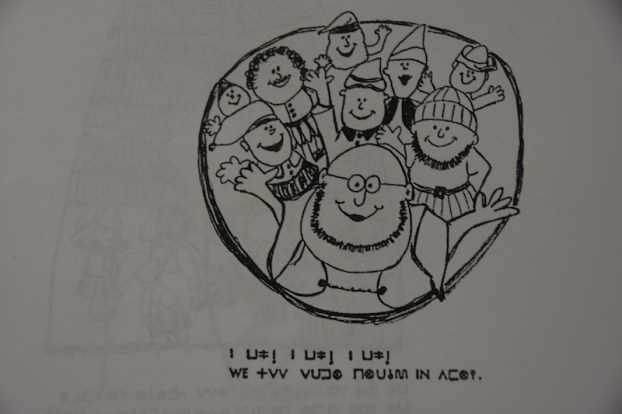 Donuts and Dyslexia participants were given a special reading packet to simulate what having dyslexia is like. (Reporter photo/Amalia Kortright)

ALABASTER – Parents and family members of Shelby County students affected by dyslexia were able to meet with the Shelby County Board of Education at the Shelby County Instructional Services Center in Alabaster during the Donuts and Dyslexia event on the morning of Thursday, Oct. 19.

Donuts and Dyslexia started off with an overview of what dyslexia is and the facts surrounding it. Visitors watched a video excerpt from the documentary, “The Big Picture: Rethinking Dyslexia.”

Participants were given a “reading packet” that demonstrated what people with dyslexia see when they read as part of a simulation.

According to Parham, Donuts and Dyslexia was the first event of its kind and served to reach out to the local dyslexic community.

“We did this in October because it’s Dyslexia Awareness Month,” Parham said.

Chelsea High School student Jackie Dick, who was diagnosed with dyslexia as a freshman, shared her experiences with it in school.

“I was unsure about it. I was embarrassed,” Dick said. “Since the ninth grade, I’ve realized it’s not a disability. I’m blessed to know about it.”

Dick thanked the SCBOE for bringing awareness for students with dyslexia.

“It’s encouraging to know that teachers and faculty have been taking this very seriously,” Dick said.

While having dyslexia may come with its own set of challenges, Parham said many students with dyslexia are incredibly bright and often find ways to work around any issues. According to Parham, Walt Disney, Winston Churchill and Keanu Reeves are just a few of several notable people with dyslexia.

“Our kids with dyslexia will go on to do great things,” Parham said.

LNLC gets creative at Art from the Heart

PELHAM – Students with special needs at the Linda Nolen Learning Center had the opportunity to show off their creativity... read more