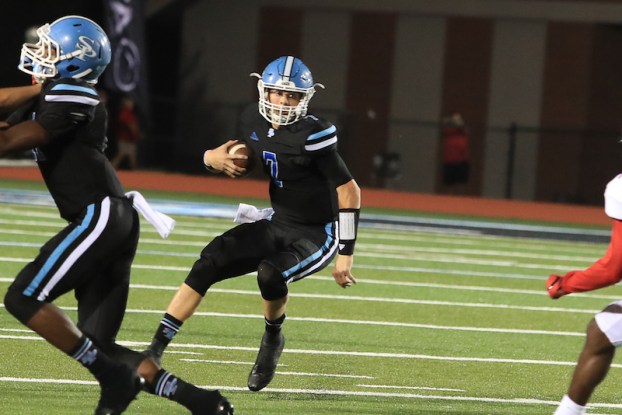 TUSCALOOSA – Spain Park’s football team punched its ticket for the Class 7A playoffs with a 24-19 win at Tuscaloosa County on Friday, Oct. 20.

The Jaguars (5-3 overall, 3-3 in Region 3 play) qualify for the fourth and final playoff berth from the region with the win and losses by Oak Mountain and Vestavia Hills.

SPHS still has one region game remaining, at home against Oak Mountain on Oct. 27, but will play that game and its season finale against Minor on Nov. 2 with its playoff fate known.

Spain Park never trailed at Tuscaloosa County but also never led by more than seven points, and the Wildcats (2-7, 1-5) matched their visitors in total yardage (398 to 396 for the Jags) and first downs (23-17).

The Jaguars struck first on an eight-yard run by D’Arie Johnson and point-after by Cole Starr with 4:29 remaining in the first quarter.

TCHS tied the score at 7-all on a six-yard run and extra point with 9:53 left in the second quarter, but Spain Park retook the lead about two minutes later on a 16-yard pass from Braxton Barker to Michael Rogers.

The Wildcats cut the deficit to one point before halftime on Fred Evans’ second touchdown run.

Johnson’s 72-yard run and Starr’s extra point were the only points scored in the third quarter.

Tuscaloosa County pulled to within striking distance again on a five-yard run by Damien Taylor with 10:45 remaining to play in the game, but the two-point conversion attempt was no good.

Spain Park brought the score to its final with a 25-yard field goal by Starr with 6:02 on the clock.

Barker completed six passes in 18 attempts for 101 yards, one touchdown and one interception.

Josh Wallace and Blake Hester led the Spain Park defense with five tackles each, and Clay Christian had an interception.

New group of Jags will rely on outside shooting

HOOVER – Fans attending their first Spain Park boys basketball game this season might wonder if they have wandered into... read more