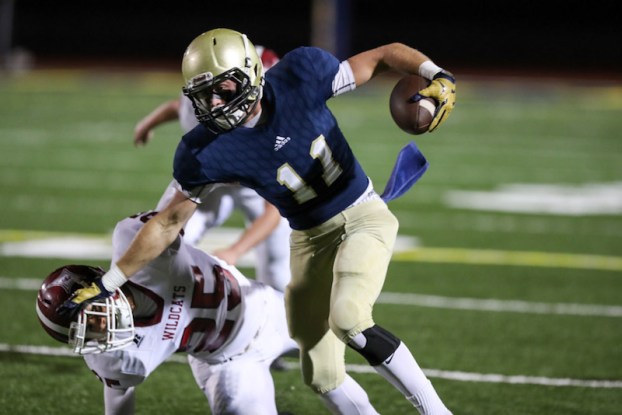 Hudson Hartsfield shoves the defender to the ground after one of his four catches. He ended the night with 118 yards on four catches to lead the Lions. (For the Reporter/Todd Kwarcinski)

FOR THE REPORTER | Seth Hagan

The Lions (8-0, 6-0) already held the region tiebreaker after their dominant 34-0 win over second place Wenonah back on September 15th, but neither team has lost a single game since then.

Briarwood was at its best with its back against the wall in the first half. After recovering a Shelby County fumble early in the first quarter, Lions quarterback Michael Hiers found a wide open Carson Eddy on a fourth and 26 for a 37-yard touchdown to get things going.

Then, right before the first quarter ended, JR Tran-Reno scampered for a 47-yard score on the first play of Briarwood’s third drive. The Lions again found themselves backed up in a third and long in their own territory, but Hiers found his favorite target of the night, Hudson Hartsfield (who finished with 118 yards on four catches), on a 69-yard bomb to put BCS up 18-0 going into halftime.

“We have some explosive guys and they’re really capable and when we stay on schedule and don’t play with penalties we’re really explosive,” said Yancey. “And the boys, thankfully, did respond after a real slow start, but frankly they stayed after it, used their talent and did some really nice things.”

Briarwood started slowly in the second half as well. After forcing a fumble on the Wildcats’ first drive of the half, Michael Hiers pass into the flat was picked off by Tyrese Goodman and returned 63 yards for a touchdown to draw Shelby County within 12.

That was as close as the Wildcats would get as BCS promptly drove down the field five plays later and scored on a JR Tran-Reno’s 13-yard touchdown run.

The Lions would ice things less than two minutes later when they turned Shelby County’s third fumble of the contest into another touchdown to go up 39-6 with six minutes to go in the third quarter.

“The main thing we just quit getting so many penalties and we started running the ball more at them and that gave them problems when we just ran downhill,” Yancey said.

The Wildcats’ rush led to five sacks, but BCS was still able to pile up 202 yards on the ground on just 18 carries. 11 of those went to Tran-Reno who went for 151 yards and three touchdowns on the night.

Quarterback Michael Hiers also finished with three touchdown passes going 9-16 for 231 yards. Yancey was excited about clinching the region, but remained cautious as his team looks to greater goals in the future.

“We’ve got to get focused. That’s the challenge right now is to become a better team than we are. We’ve made some good progress all year, but we certainly have not arrived.”

Briarwood has won every region match in 2017 by at least 17 points going into next week’s tilt at Pleasant Grove. The Shelby County Wildcats fall to 3-5 on the season and 1-5 in region play, but look to improve on that record when they visit Woodlawn on Oct. 27, who has yet to pick up a win in Region 5.

Calera has 6 rushing touchdowns in 42-16 win

FOR THE REPORTER | Karl Hunt CALERA, Ala. – The Calera High School Eagles soared to a dominating 42-16 victory... read more