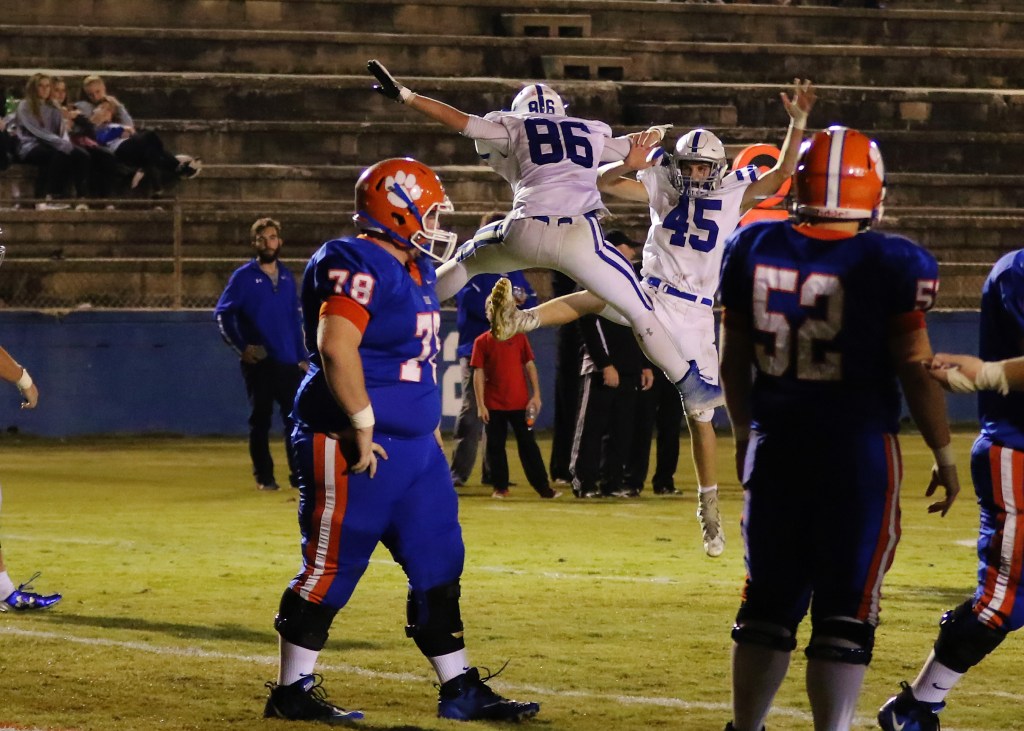 Chelsea celebrated its first win of the 2017 season by taking down Chilton County on Friday, Oct. 20. (For the Reporter/Cari Dean)

CLANTON – Chelsea’s defense shut out Chilton County in the final three quarters of play to pick up its first win of the season, 25-13. The win snaps a seven-game losing streak to open the season.

“We hadn’t had a breather in the first seven opponents,” Chelsea head coach Chris Elmore said. “Whenever everyone works hard and you haven’t won one yet, it tends to wear on you and nag on you. I’m proud of our kids to get that first win. I know they’ve been wanting it. They played hard all year and practiced all year. They just didn’t have anything to show for it until tonight. Hopefully we can build off of it.”

The Hornets scored on their first drive of the game, as Collier Blair scored from 6 yards out. Chelsea forced Chilton County to punt on its next drive, but gave it back to the Tigers with a fumble on the punt return. With a short field, CCHS punched in a 6-yard touchdown run from Triston Schmidthorst to tie the game, 7-7.

Chilton County took the lead, 13-7, on a 56-yard touchdown run from quarterback Shi Keem Laister as time expired in the first quarter. It was the last big play the Hornets would allow.

Tanner Middleton added a 25-yard field goal in the second quarter, and then Turner Griffin found Christian Pruitt on a 23-yard touchdown pass to give Chelsea a 16-13 lead entering halftime.

Chelsea received the ball to start the second half and capped a 54-yard drive with a 1-yard touchdown Kendrick Simpson, making it 23-13.

“That’s when we really took control of the ball game,” Elmore said.

The Hornets’ offense was unable to extend its lead though in the final 20 minutes of play.

“We had plenty of opportunities to put the game away, and we just couldn’t do it. It’s unfortunate, but sometimes that first win is the toughest and we couldn’t find a way to pull away in the fourth quarter,” Elmore said.

Connor Griffin picked off a pass for the Hornets late in the game, but Tanner Griffin turned around and threw a pick on fourth down deep in Chilton County territory. The Hornets’ defense pressured the Chilton County quarterback who lost the ball out of the end zone for a safety and ice the game, 25-13, with just over a minute to play.

“Tonight was not pretty by any stretch of the imagination,” Elmore said. “We turned the ball over too much, missed a couple of tackles on defense, but they found a way to close it out. Sometimes when you lose seven in a row, that first one is the hardest one. Hopefully we can move on from here.”

Simpson finished with 120 yards rushing on 24 carries, while Blair added 73 yards on 19 carries. Turner Griffin threw for 101 yards on 6-of-15 passing. Colton Carter led the receivers with one catch for 26 yards, while Lando Nichols had two for 24 and Blair had one catch for 24 yards. Pruitt’s 23-yard TD was his only catch of the night.