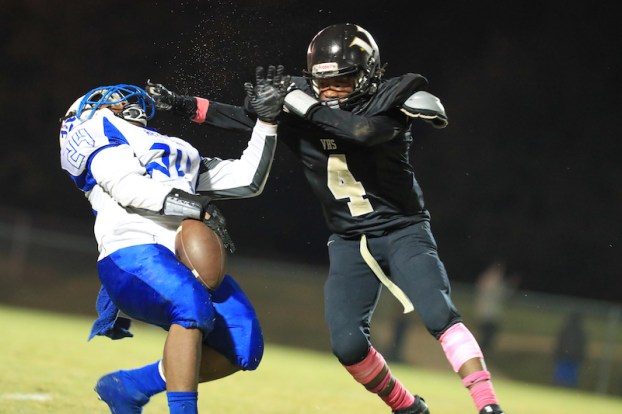 Vincent's Caleb Wilson hits the Reeltown punt returner during the first quarter in what seemed to be a clean play and a recovery by the Yellow Jackets. (For the Reporter/Dawn Harrison)

VINCENT – In a game that last just over three hours, the Vincent Yellow Jackets failed to clinch a playoff berth after losing 48-15 at home to Reeltown on Friday, Oct. 20.

It was a game that got away from playing the game of football and became the officials show, as a seemingly clueless set of officials failed to not only control the game, but know what was going on.

Early on, everything was going smoothly, and after the Yellow Jackets opened the game with a failed onside-kick attempt, Reelltown started at its own 44-yard line with good field position.

It took just 2:48 of game time before the Rebels went 54 yards and posted the game’s first points. After a failed PAT, Reeltown held a 6-0 lead early in the game.

The team’s traded punts on their next three possessions, but the latter of those punts by Vincent is where things started spiraling out of control.

Yellow Jackets’ punter Zach Munoz booted the ball away to a waiting return man. As soon as the return man fielded the punt and had clear control of the ball, Caleb Wilson came flying in to make a huge hit right to the chest, which jarred the ball loose.

Vincent recovered the ball inside the Rebel 10-yard line and appeared to be set up in great position to score a touchdown, but a late flag was thrown.

After 10 minutes of discussion between refs, it was never explained what the exact call was, but just that it was a personal foul. The referees then huddled back together for another seven minutes after the call to seemingly think about overturning their original call, but never did.

Reeltown never did anything on the ensuing possession, but Vincent’s Chris Hardie, who had run for 994 yards and 13 touchdowns in the last four games, sprained his ankle during the drive on defense and was out for the night.

There were several more occasions where the officials didn’t seem to know what was going on as they met for many minutes during every flag that was thrown.

It eventually led to the teams getting chippy with each other and close to both teams getting into fights. Eventually, the Yellow Jackets’ defensive coordinator was ejected after sticking up for his guys.

Reeltown went on to take a 21-3 lead into the half after gashing through Vincent’s undersized defense. The Yellow Jackets clearly missed Hardie as they had to move to a pass-heavy attack, but quarterback Dusty Davis and Zavien Kelley had an easy time connecting all night, while Wilson, the new running back, was running with power for a small-framed guy.

The momentum they lost from Hardie going down early in the contest, and the officials lengthy discussions clearly affected the team.

Vincent moved to 5-3 overall with the loss and 3-3 in region play. They’ll take on a 2-4 Ranburne team at home on Friday, Oct. 27, to determine which team will advance to the playoffs.

By ALEC ETHEREDGE | Sports Editor Not many teams would consider a trip to the sub-regionals a down year, but... read more