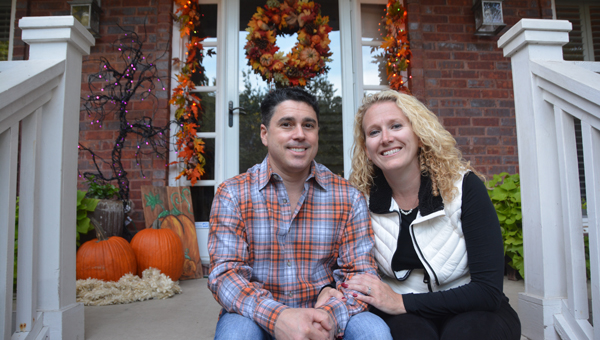 Paul and Melissa DeCarlo are among the residents of Lake Point Estates in Riverchase who have turned the neighborhood into a Halloween destination. (REPORTER PHOTO/STEPHEN DAWKINS)

HOOVER – Paul DeCarlo was confused by the numbered lumber he found in the Riverchase home he and his wife Melissa moved into in 2013 until he discovered a diagram.

The materials and diagram were used by the previous owner to construct a tunnel at the front of the home each Halloween for trick-or-treaters to walk through as they sought candy.

DeCarlo now reconstructs the tunnel with new twists each year as part of the festivities that bring hundreds of children and their parents to the Lake Point Estates subdivision.

DeCarlo adds a fog machine and spooky decorations to the tunnel, along with Melissa dressing up and scaring entrants.

DeCarlo said it usually takes him a couple of days to build the tunnel.

The neighborhood’s popularity is so great that police block off the entrance to all vehicles except those belonging to homeowners.

Portable toilets are provided on site by the Lake Point Estates Association, which coordinates the festivities.

Residents from other areas of Riverchase donate candy to Lake Point Estates homeowners because of the high demand.

The DeCarlos said they typically purchase two coolers full of candy and supplement that amount with donated candy.

The subdivision has become a popular destination for trick-or-treaters because it has sidewalks and streetlights unlike most areas of Riverchase, relatively flat terrain and the efforts of homeowners.

In addition to DeCarlo’s tunnels, people have turned their garages into miniature haunted houses and even hired bands to provide music.

Residents and their guests regularly set up at the end of their driveway to create a scene similar to football tailgating.

“The whole community participates in this thing,” DeCarlo said.

By NEAL WAGNER / Managing Editor Those looking to get rid of unwanted or unused prescription medications will be... read more