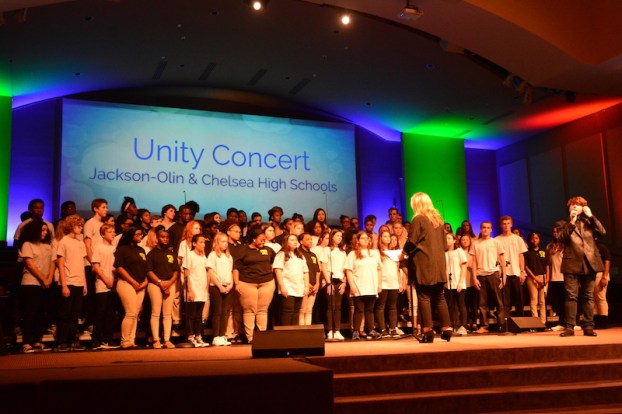 BIRMINGHAM – The Chelsea High School and P.D. Jackson-Olin High School choirs celebrated their second annual Unity Concert on the evening of Thursday, Oct. 13 at Metropolitan Church of God in Birmingham. According to ChHS choir director Kay Dick, the purpose of the concert was to promote unity between people from all walks of life.

“We love singing. We love performing,” Dick said. “Most of all, we love this feeling that we all have, which is unity.”

JOHS choir director Tracey Hooper said she and Dick originally came up with the idea for a joint concert a few years ago after they met at an event held by the Alabama Choir Directors Association.

“She just had a good spirit out of her,” Hooper said.

After the first Unity Concert in 2016 was a success, Hooper said she and Dick decided to host a second one.

“It really impacted the lives of my students to have fellowship with the other students,” Hooper said.

Before the concert started, visitors wrote down what the word “unity” meant to them. The submissions were read aloud before all choirs circled around the room and sang their final song.

In the weeks before the concert, Dick said she and Hooper faced several challenges getting the event organized. The concert was originally supposed to be held at in the ChHS auditorium, but was relocated to the church after the auditorium began having lighting issues.

“(The church) came through in a pinch,” Dick said. “We couldn’t have done it without them.”

Dick said the turnout to the concert was larger than she had anticipated.

“It was a big undertaking, but it was worth it,” Dick said. “It was bigger than expected, but it always is.”

“There’s nothing like music to bring people together,” Dick continued. “We all love music, so therefore, we all love each other.”