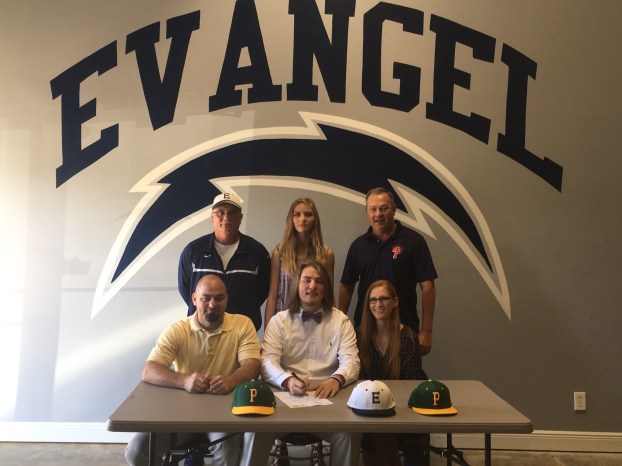 MONTEVALLO – Evangel Christian School senior Ethan Johnson signed onto the baseball team at Presentation College in Aberdeen, South Dakota at a 10 a.m. ceremony on Tuesday, Oct. 24 at the Evangel Sports Complex in Montevallo.

“He did great last year. He was our number one pitcher at Cornerstone,” Smith said. “He’s a hard worker and we’re excited to see him go to the next level. That was his goal when he first came to me, and now he’s achieved it.”

Johnson said he has been playing baseball since he was four years old. In addition to playing on Evangel’s team, Johnson also plays for the travel baseball team, Central Alabama Prospects.

“I’ve always been playing, and it’s been my dream to play at the college level,” Johnson said.

Johnson credited Smith and Prospects coach Tim Cahalane for the hand they played in his athletic success.

“(Smith) pretty much was a father figure to me,” Johnson said. “After I moved from public school to private school, he took me in and made sure I stayed focused.”

“He fixed all of my flaws in baseball and made sure I stayed focused,” Johnson said of Cahalane.

He also thanked Presentation College head baseball coach Michael Dahl for giving him the chance to play for the saints.

Lastly, Johnson thanked his parents and younger sister, Delaina, for their unwavering support.

“They made sure that I stayed focused all of the time, and they made sure I didn’t give up on my dreams,” Johnson said.

By ALEC ETHEREDGE | Sports Editor It feels as if everything is on the line Friday night for the Thompson... read more