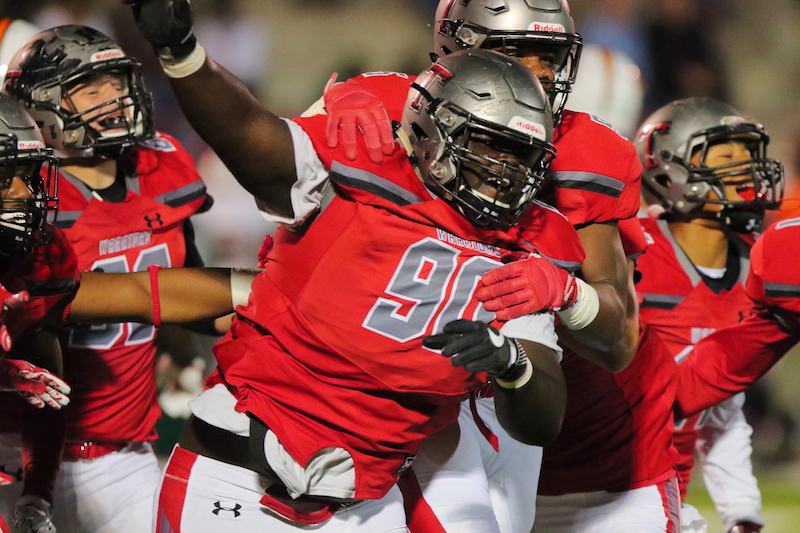 It feels as if everything is on the line Friday night for the Thompson Warriors. Although the team has already locked up a spot in the playoffs and home-field advantage in the first round, the Warriors are looking for something much more historic when they travel to the Hoover Met on Oct. 27 to take on the No. 2 ranked Hoover Buccaneers.

0-20. That’s Thompson’s all-time record against Hoover/Berry, including one playoff loss, as the Warriors will look to pick up the school’s first win against the state’s most elite team. The Warriors have had two three-point losses, one in 2005 and one in 1998.

The two teams will meet not just in a battle of No. 2 and No. 3, but a battle for the Class 7A, Region 3 Championship. In its history, Thompson has won just eight region championships with six coming in the ‘80s and their most recent coming in 1997.

What head coach Mark Freeman has done to have his team in this situation in just three years is unbelievable. After taking over an 0-10 team in 2015, Freeman led the Warriors to back-to-back 5-5 seasons the last two years and now has his team sitting at 8-0 and No. 3 in the state. 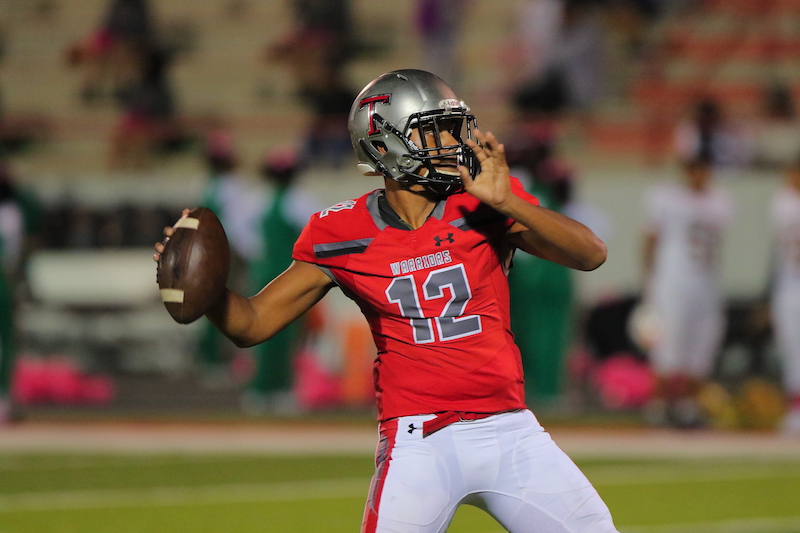 Thompson quarterback Taulia Tagovailoa has been the difference maker between last year’s team that lost three games by three points or less and this year’s 8-0 team. He’ll look to lead the Warriors to their first ever win over Hoover on Friday. (For the Reporter/Eric Starling)

Hoover was able to come out on top 20-0 in this matchup a season ago, but this is going to be a much different game in 2017 and the numbers prove it.

Hoover’s closest games were against Spain Park, Mountain Brook and Vestavia. The Bucs beat the Jags 27-24 in the final two minutes needing a miraculous catch on third and long to do so. They beat the Spartans, who also had a chance to take the lead late, by just 10 points at 31-21. Hoover also beat Vestavia by just 10 points as well, 17-7.

That’s good enough for an average margin of victory of 7.7 points in their toughest games of the season.

Thompson beat Spain Park 40-17, Mountain Brook 40-13 and Vestavia 45-14; not having to play their starters for the entire game in any of those matchups. That’s good enough for a margin of victory of 27 points, almost 20 more points than Hoover against the same opponents.

Just to take Hoover’s most recent game against Vestavia for example, the Bucs scored just one offensive touchdown and totaled just 254 yards.

The Warriors, however, were able to amass 454 total yards and six offensive touchdowns in a 45-14 win.

Just looking at the numbers on paper, Thompson is the better team and should win this game running away because of their dynamic offense, but going up against this Hoover defense as well as the mental side of things will be what makes it tough for the Warriors to pick up that first win over Hoover.

The Bucs haven’t given up more than seven points in any of their last four games, and albeit those numbers have been put up against the four worst teams in the region, it’s still an impressive number.

Hoover is allowing just 13.4 points per game at this point in the season, but did give up 21 and 24 to both Mountain Brook and Spain Park. Thompson’s offense is a lot more dangerous than both, averaging 43.8 points per game.

What a lot of people don’t realize is that this team is more than just quarterback Taulia Tagovailoa.

They have receivers in Ahmad and Mo Edwards, as well as Kyle Smoak, that can catch everything; they have two running backs in Shad Byrd and Joseph Ford, each of who can go over 100 yards in any given game; they have Division I Caliber linemen on both sides; and multi-year starters on defense.

It’s one of the more complete teams you can see at the high school level of competition.

The mental aspect may be where the Warriors face their biggest obstacle in this game. The fact that they have never beaten Hoover in school history, it’s a top-3 battle for the region championship and possibly the biggest game in the school’s history—easily since the 1980s—are all things Thompson can’t worry about.

Having won 10 state championships since 2000 and four in the last five years, Hoover has been in plenty of these situations, and head coach Josh Niblett knows how to handle the pressure.

That being said, this is a different Thompson team, the likes of which we have never witnessed. With four year starters such as K.J. Robertson and Jalen Rayam, and a quarterback ready to perform at the collegiate level, who has plenty of offensive weapons not only out wide, but in the backfield as well; Thompson will make history this Friday night on the 20-year anniversary of its last region title.