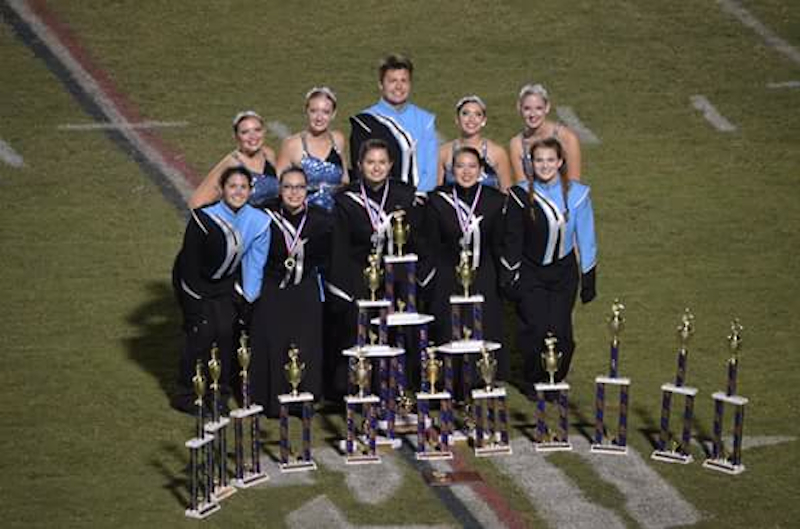 HHS band members pose with awards they won at a recent competition. (Contributed)

After many long hours of practice, the Helena High School Marching Band competed in two competitions showing off their show, “Beyond the Emerald Curtain,” featuring music from the Broadway Musical “Wicked.”

From the green flags of Oz to the yellow brick road ending, the band entertained the audiences with the songs “No One Mourns the Wicked,” “Dancing Through Life” and “Defying Gravity.”

At the Covered Bridge Marching Festival competition on Oct. 7, the band brought home many awards. These included receiving all superior ratings, best in class 4A Band, drum majors, majorettes, color guard, dance team and percussion. The color guard and majorettes earned the Amanda Marks Memorial trophy for highest scoring visual teams. They were also recognized with the Sonny Tolbert Award for Excellence in recognition of superior performance and recognized as the best band in Division II.

The following weekend, the band traveled to the Mud Creek Marching Festival where HHS earned a total of 14 awards at this competition.

The guard was recognized as the highest guard score of the day and awarded the Tam Easterwood Memorial Award.

The drum majors were awarded the Vanessa Watts Memorial Award for highest drum major scores of the day.

The band will be traveling to New York City to perform in the St. Patrick’s Day Parade in the spring of 2018 where they will proudly represent Helena High School.

While in NYC, they will have the opportunity to see the sights of the city along with getting to see the broadway versions of “Wicked” and “Lion King.”