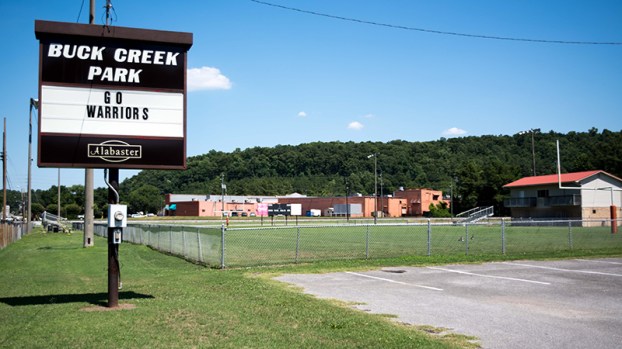 A landscape company has created a master plan for Buck Creek Park, Warrior Park and the municipal green area near Alabaster City Hall, and presented the proposal to the City Council during a late-April meeting. (File)

ALABASTER – A Georgia-based landscape architecture firm will look at ways to beautify and upgrade multiple parks and green spaces in the city over the next several weeks before submitting their plans to the city for approval.

City Council members voted unanimously during their Oct. 23 meeting to pay the Wood Environment and Infrastructure Solutions company $8,850 to prepare a design plan for Buck Creek Park, Warrior Park and the municipal green near City Hall and the Alabaster Senior Center.

The vote came after City Council members discussed the matter with City Manager Brian Binzer during an Oct. 19 work session.

Binzer, who came to Alabaster from Marietta, Georgia, earlier this year, said he has worked with the landscape company on multiple projects before, and touted the company’s previous work. The company has also completed projects in Huntsville and Gulf Shores, said Alabaster Mayor Marty Handlon.

“They would basically come up with a master plan for those areas,” Binzer said of Buck Creek Park, Warrior Park and the municipal green. “We’re trying to find out how to best utilize the space we have.”

While studying the areas, the company will determine how to best connect the two parks, will come up with a plan for the former YMCA property the city owns next to the Senior Center, will submit a design plan for the area surrounding the former Siluria mill water tower near City Hall.

The plan likely will also include the design for an amphitheater in the municipal green area, which regularly holds outdoor music events such as Jazz in the Park.

“Our comprehensive plan actually calls for an amphitheater in that green area between City Hall and the Senior Center,” Binzer said.

The city is also considering partnering with the Angel Warriors Foundation to construct a special-needs playground at one of the parks, Binzer said.

The company likely will begin working on the plan in the next few weeks, and will present it to the city in early 2018, Binzer said.