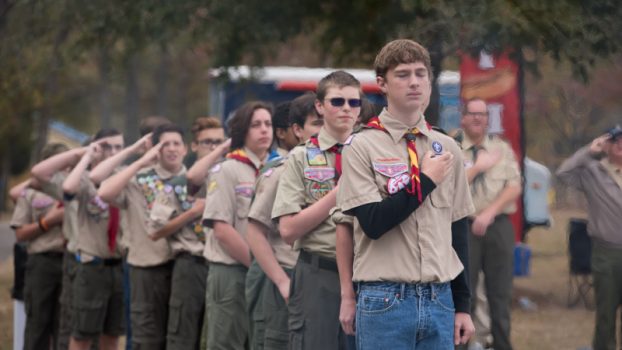 Members of Boy Scout Troop 548 salute during the Pledge of Allegiance at last year’s Alabaster Veterans Day ceremony at Veterans Park. This year’s ceremony will begin at 9 a.m. on Nov. 10. (File)

ALABASTER – The city of Alabaster and local Boy Scouts will again honor the city’s veterans on Nov. 10 during the city’s second-annual Veterans Day program at Veterans Park.

The program will begin at 9 a.m. at the park’s veterans memorial with a ceremony to honor local veterans, which will include a speech from Vietnam War veteran and Alabaster resident Ron Jefferson.

Jefferson is the founder of the Last Man Standing Foundation, and is the last known living Vietnam veteran to have served five consecutive tours in the war.

All five of his brothers served in each of the military branches.

At age 17 Jefferson entered the U.S. Navy in 1962 as a cook and was honorably discharged in 1974 as a Green Beret in the U.S. Army, rank Master Sergeant.

He earned many medals during his years of service including the Purple Heart and Cross of Gallantry.

Jefferson’s speech will be followed by a flag retirement ceremony hosted by the Alabaster-based Boy Scout Troop 548.

This will mark the second straight year for the program, which drew more than 50 attendees last year.