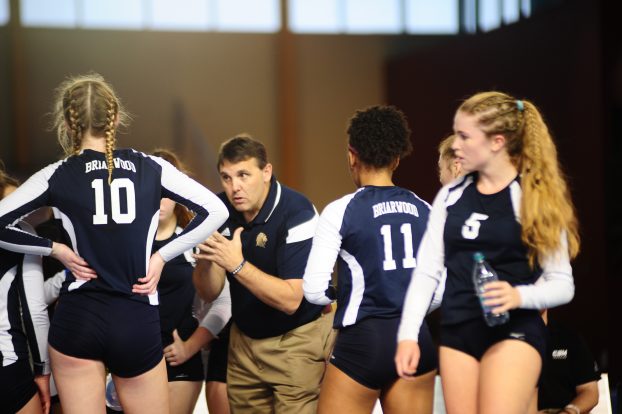 NORTH SHELBY – It’s been an up and down season for the Briarwood volleyball team, but just like they did last season, the Lions seem to be getting hot at the right time by winning the 2017 Class 5A, Area 8 championship on Tuesday, Oct. 24.

Briarwood got the right to host after finishing the regular season perfect against area foes Sylacauga, Moody and Shelby County.

Even though the Lions had played perfect against area opponents up to that point in the season, they still had to take care of business in the area tournament if the team wanted to be named area champions and find a spot in the super regionals at the end of the week.

In the semifinal match, Briarwood went up against county foe Shelby County, and was able to make quick work of the Wildcats winning in straight sets for a 3-0 victory to sew up a spot in the super regionals and area tournament championship match.

Briarwood came out strong in the first set and played from in front the entire way, picking up an easy 25-9 victory to take a 1-0 lead. The next two sets weren’t much different as the Lions won 25-13 and 25-12 in the second and third sets, respectively.

They were able to handle Shelby County by a combined score of 75- 34 barely breaking a sweat in their opener of the tournament, which was something that would be key heading into their next match against Moody.

The Blue Devils were forced to play four much tighter sets in their opener against Sylacauga winning 3-1 (20-25, 25-16, 25-14, 25-17). Just like Briarwood, Moody had clinched a spot in the super regionals and was looking for the same accomplishment as the Lions—an area championship.

Kaley Bruce led Briarwood with 26 assists in the first match, while Sophie Muir-Taylor led the team with 13 kills.

With the area championship on the line, Briarwood came out in the title match and picked up right where they left off in the semifinals.

Just like the matchup against Shelby County, the Lions didn’t allow Moody anywhere near the lead through the first two sets of the championship match.

For the fourth and fifth consecutive sets, Briarwood won by 10-plus points as they picked up 25-12 and 25-14 wins, respectively, to take a 2-0 lead in the match.

Moody wasn’t ready to go down without a fight as its season was on the line in the third set. The Blue Devils gave Briarwood its toughest challenge of the night, but the Lions were too much on their way to a 25-18 win in the final set to pick up a 3-0 win.

Briarwood didn’t drop a single set, finishing 6-0 on the night, on its way to winning the 2017 area championship. The title sets them up as a one seed heading into super regionals.

Grace Patterson finished second on the team with 24 kills for the night. Muir-Taylor led the team with 26 kills in the tournament, while adding 11 digs, nine blocks and five aces.