COLUMBIANA – A 23-year-old Pelham woman is being held in the Shelby County Jail on bonds totaling $30,000 after she allegedly stole an Alabaster woman’s identity and pocketed tens of thousands of dollars from a local law office. 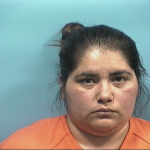 Identity theft and first-degree theft of property are both Class B felonies, and are punishable by up to 20 years in prison upon conviction.

According to Rodriguez’ arrest warrants, she allegedly stole an Alabaster woman’s identity on Sept. 14 and stole $1,560 from the victim, leading to her identity theft and third-degree theft charges.

Rodriguez’ first-degree theft of property charge came when she allegedly stole $11,747 from the local Chasteen law firm between October 2016 and July of this year.

As of Oct. 25, Rodriguez remained in the Shelby County Jail on bonds totaling $30,000, and did not yet have a preliminary hearing date set in front of Shelby County District Court Judge Daniel Crowson.

PELHAM – A Georgia man was arrested in Pelham as a part of the FBI’s Operation Cross Country XI, a... read more