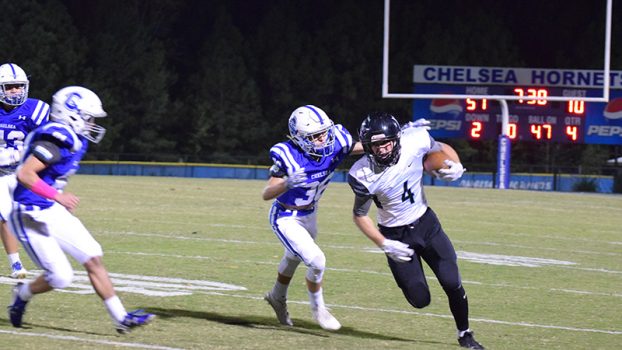 A picture from last year's Chelsea/Helena game. The two will renew their rivalry game this Friday night with the game being pink-out for the second year in a row. (File)

As we head into Week 10 of the high school football season, we’re down to our final two weeks of the regular season and our final week of region play. There are two in-county matchups in the AHSAA this Friday night, while one team has a playoff spot pending on the outcome of its game.

Both of these teams have had their share of struggles lately with Spain Park losing three of five and Oak Mountain losing five in a row. Spain Park’s two wins have been against Huffman by just nine and Tuscaloosa County by just five, both of whom they should have beaten handily.

Oak Mountain’s five game losing streak has come due to a rigorous schedule featuring three top 10 teams, but the Eagles did almost upset No. 8 Mountain Brook last Friday, and seemed to find something after trailing 21-0 before coming back to lose just 31-28.

A combined record of 2-14 is the storyline of this game, but what those numbers don’t show is the fight with which each team has fought despite those records.

It led to Chelsea picking up their first win last week in a 25-13 victory over Chilton County, while the Huskies have battled in games against three top 10 teams in a row being with in a possession of each at the half.

Pelham is coming off of a bye after locking up the fourth playoff spot in Class6A, Region 3 two weeks ago in a 55-28 win over Chilton County. The Panthers will be welcomed back to region play against an Opelika team that just took down No. 4 Wetumpka 20-19 for the Indians’ first loss of the season this past Friday night.

Pelham’s offense has plenty of offensive weapons in Matt Rye, Nic Blackburn, Brandon Sledge and Edward Gipson, but Opelika looks to be fully healthy and back to a top 10 team. They’ll eventually pull this one out at home. Pelham 24 Opelika 34

Briarwood has already sewn up the Class 5A, Region 5 title for the second consecutive year and will look to finish undefeated in region play for the second straight year as well this Friday.

Pleasant Grove has had an offensive outburst against Shelby County and Woodlawn in its last two games putting up 49 and 41 points, respectively. Against good defenses in the four games prior, however, they failed to score more than 20.

Against a Briarwood defense that’s still giving up less than 10 points per game at 9.8, the Spartans will struggle to keep up with a Briarwood offense that has several weapons. Briarwood 31 Pleasant Grove 14

Calera has stormed back from its bye week two weeks ago winning 41-14 over Jemison and 42-16 over Sumter Central. With the resurgence of the ground game and a threatening quarterback, this offense is starting to click and become scary. They’ll take advantage of a Marbury defense giving up 26.9 points per game en route to another big game.

The Bulldogs have lost five games in a row having played an extremely difficult schedule with a lot of injuries that have pushed young athletes into starting roles. This week Montevallo (2-6, 0-5) will take on Carbon Hill (2-6, 0-5) in a very even matchup. It should be a tight game, but Montevallo’s young offense now has some experience and should lead them to the win. Montevallo 31 Carbon Hill 24

Vincent is coming off an extremely tough 45-18 loss to Reeltown this past Friday in which leading playmaker Chris Hardie seemingly sprained his ankle.

This week, the Yellow Jackets will take on Ranburne needing a win to make it to the playoffs. From what head coach Wiley McKeller has told me, they’ll be without Hardie this week and were already banged up before his injury.

There is a scenario for a three-way tie with Horseshoe Bend, Vincent and Ranburne, which would send the decision of who makes the playoffs to the final regular season non-region matchup the week after. This week, they’ll play tight, but if several guys can’t go, the Yellow Jackets may not have enough. Vincent 27 Ranburne 31