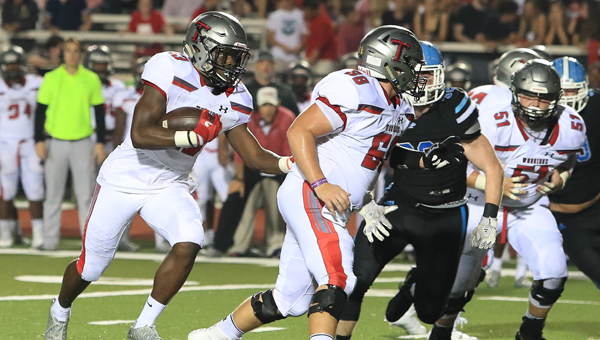 Thompson won't just be wearing its white uniforms tomorrow night against Hoover, but is hoping the fans will join in and help with the white out efforts. (File)

HOOVER – The Thompson Warriors released a short video on social media sites on Wednesday night, Oct. 25, proposing that everybody attending the big game between No. 3 Thompson and No. 2 Hoover at the Hoover Met on Friday, Oct. 27 wear white as they look to white out the Bucs.

The hopes of the white out stems from the Warriors’ new uniforms in 2017 that they call icy-white featuring white pants with red trim along the leg and white tops to complete the all-white look, while wearing the iconic silver helmet donning the red T.

It’s a game where the hype couldn’t be any higher as the two top-3 teams will be battling for the Class 7A, Region 3 Championship. If you are planning to go to the game, the city of Hoover has put out a traffic warning saying that from about 4 p.m. until the game has begun, traffic will be extremely heavy.

With the Hoover Met saying they are expecting between 10,000-15,000 people in attendance, it will be one of the most buzzworthy high school football games in the state this year.

If you are planning to skip the game in person due to the threat of rain, it will be shown locally on my68 and streamed live on THS TV at thslive.com.

As for our coverage, make sure you are following our Twitter account @SCRsports for live updates. We will also be posting quarterly updates on our Alabaster Facebook page. I’ll also have a Facebook live video before the big game on our Shelby County Reporter Facebook page.

While all of those are great options if not there in person, the Warriors are looking for their first region championship in 20 years and first win over Hoover in school history, so the coaching staff and players would love the support in person as they look for history.