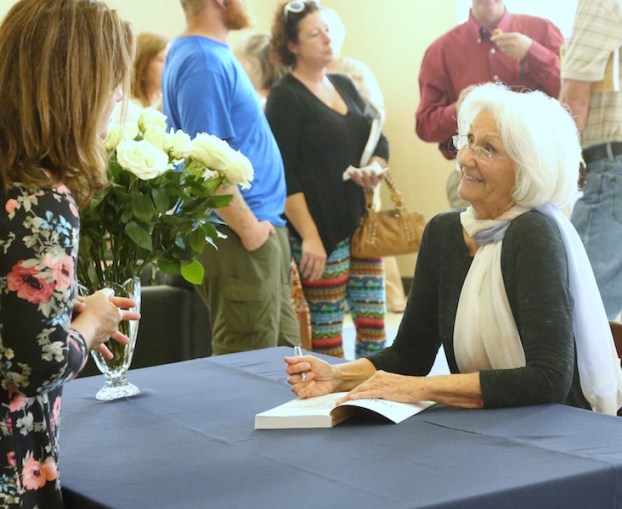 Local Chelsea historical novelist Gladys Hodge Sherrer at Snead State Community College in North Alabama for the launch of her book “Trapped in the Crossfire: A Civil War Saga of the Endurance of Family.” (Contributed)

Seldom does a writer relinquish his opportunity to craft the words of an article. But this week’s interview with Gladys Hodge Sherrer is one such rare occasion. She is a local Chelsea novelist who is stirring up some press in the historical fiction field. Her vivid answers gave us a peek as to why.

Nivens: I know you are passionate about accurate historical research and writing. Can you speak to that desire?

Sherrer: There are plenty of historical fiction books which glamorize the past, sugarcoat the evils of war, for example. I believe the Scarlett O’Hara myth should be debunked, and truth told.

I wanted the readers to feel the cruel sharpness of loss, the fierce gnawing of hunger pangs, hot rivers of sweat running down and the muscle spasms striking in the night after walking 20 miles. A writer cannot easily reproduce feelings by a nonfiction narrative.

This passion to know my forefathers came from a few seeds planted by an older cousin, telling family legends, our Civil War saga. My mind got wrapped around images of suffering, vulnerable women and children during that War, which was created by the men in political power.

As I began to dig into the books and read how people actually starved to death in North Alabama, I couldn’t stop. I collected bits and pieces of the past. I put them together like a picture puzzle that grew clearer with every book I read, battleground I visited and historian I consulted, in four states. “Trapped in the Crossfire” is as close to the truth of those times as a 21st-Century writer can come. The reviewers (most who are historians) agree.

Nivens: You are having a book signing at the Chelsea Community Center. I see more than sitting and signing is involved.

Sherrer: Several North Alabama historical societies have contacted me, and I have speaking engagements already on next year’s calendar, but this is the first in the Birmingham region. I chose for my local debut, Chelsea, my hometown for nine years. Our ancestors shared similar lives and trials. There are lessons to be learned by getting to know who they were and how they lived.

In my eight years of research for this book, I gleaned images, documents and photos, some which I’ve made into a slideshow. It will be used at my signings to demonstrate history, antebellum and Civil War South, while telling portions of the story, “Trapped in the Crossfire.”

And, her most fulfilling thing about being a writer?

Sherrer: Along with my joy in writing of history, people are my passion. On Nov. 5 at the Chelsea Community Center, I will be meeting more of my Chelsea family. That thrills me! Writing offers boundless opportunities for meeting and interacting with people. With “Trapped in the Crossfire” I have the opportunity to introduce people to their ancestors’ lives. How fulfilling is that?

By TONY NIVENS / Community Columnist “I have lived in nicer homes, but I have loved living here. It has... read more